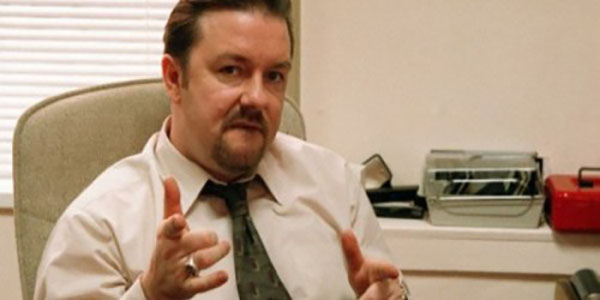 David Brent has finally achieved his dream: he and his band, Foregone Conclusion, will play a couple of "low-key" gigs in October next month. Brent is officially a rock-star; but to many, he's already one of the finest sitcom characters of all time. And the character will forever be synonymous with Ricky Gervais. The same Ricky Gervais who's released books, presented chat shows, stinted as a radio DJ and appeared in countless Hollywood films, probably still gets asked to do the dance. To much of the public, there's no line between the two: Brent is an extension of Ricky's media personality, and when watching Gervais on-screen in 'Stardust', 'Ghost Town' or 'Night at the Museum', you generally expect a "weeeellllll..." to pour from his mouth, before a witty retort. Ricky Gervais is a much-underrated actor though. Really. But in this article, I'll focussing on something that's not really discussed much in relation to him: I'll be discussing why he and his writing partner, Stephen Merchant, are head and shoulders above nearly every other sitcom writer to emerge from 21st Century Britain. In my opinion, of course.
Contributor
Mark White
Contributor
Twitter

The Office: The Progressively Harder Name The Character Quiz