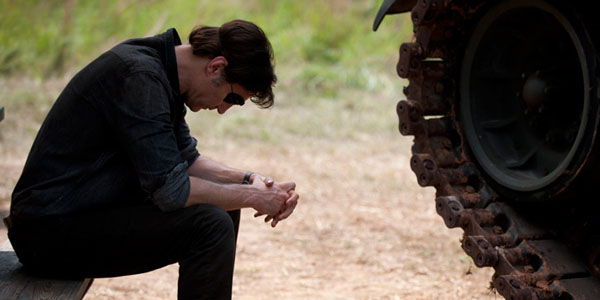 The fourth season of The Walking Dead is well underway, but many questions have been left unanswered. Thats not to say theres been nothing to keep the viewers satisfied. A season filled with nail biting action has left some viewers looking like theyve encountered a dainty walker. Theres been murder, exile, slaughters, and martyrs, but these have only been fleshy tasters on the way to the body of the season. In between these fleshed out moments has been the bones of the season  the unanswered questions are building the structure of the season as a whole. While the merit of an episode can be diagnosed by how it handles major moments, a healthy season thrives on the intricate events and questions that unify its various character and story arcs. These tiny moments leave the audience with certain expectations, teasing them with implications that develop certain arcs throughout the season. They guide us to things we expect to see happen, and we hope theyre treated with the care they deserve. If the expectations arent satisfied, then the character and story arcs are never grounded or developed, and the season is doomed to flat line. In this vein, Im going to extract the expectations that have been set up for the season thus far. Ill wade through their bloody implications, explaining their sources, gauging their directions, and making my predictions. Of course, for a number of predictions, Im using the graphic novels as a guide, so there are spoilers up to Volume 11: Fear The Hunters. Nonetheless, these expectations are grounded in what has been revealed on the show; they arise from questions the show has offered in the form of cliff hangers and minor scenes. Because youre probably expecting me to get on with it, here are 10 things were waiting to see happen in The Walking Dead..
Contributor
Eric Morlang
Contributor
Twitter

The Mandalorian Season 2: 10 Biggest Moments And Reveals In "The Marshal"