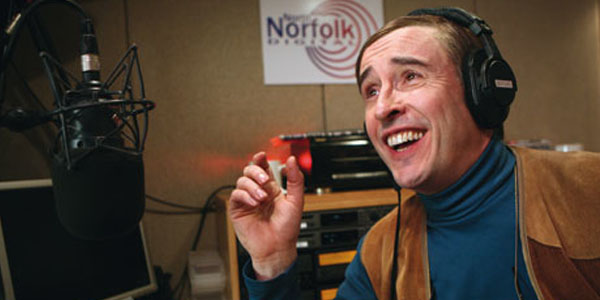 With the recent release of his movie Alpha Papa, (summed up well by Alan himself as "a powerful piece of work with a capital POW"), Alan Partridge has hit career highs not reached since TV Quick magazine voted him Man of the Moment in 1994. It seems Alan is making the most of the limelight, and in a career that has seen considerably more downs than ups, who can blame him? His life so far has been a riches to rags and back to (admittedly more modest) riches tale. Although he has never quite returned to the heady days of his own TV chat show, he has still come through some pretty tough periods - unfairly being denied a second series of his show after shooting a guest live on air in the final episode, having to return to the graveyard slot at Radio Norwich and living in a Travel Tavern for 182 days. There was also the tricky period where he became clinically addicted to Toblerone, a shocking ordeal that culminated in him driving to Dundee in his bare feet. Harrowing stuff. So we can all be pleased that Alan has finally found some stability as a DJ of quality and panache on North Norfolk Digital. Here we look back at some of the ups and downs of Alan's career. This list is in no particular order.

15. Sneezing Blood On The Blouse/Cardie Of A Lady of the Cloth

http://www.youtube.com/watch?v=CmywrDBW3Us Alan has done many bad things. He insulted every guest who dared to come on his chat show, he punched the Chief Commissioning Editor of BBC Television in the face twice with a turkey encased fist, and he shot a man dead on live TV. But this still ranks as the second worst thing he's ever done.
Contributor
Philip Lewis
Contributor
Twitter

Phil is a politics graduate interested in film, TV and tweeting Alan Partridge quotes to obscure British celebrities. He is currently reviewing every film he watches between Halloween 2013 and Halloween 2014 over on his blog - www.philfilmblog.blogspot.co.uk

Friends Quiz: What Would You Do If You Were Monica?

The Big Bang Theory Quiz: Who Am I - Sheldon, Leonard, Raj Or Howard? New

The Big Bang Theory Or Friends Quiz: Who Was It - Amy Farrah Fowler Or Phoebe Buffay?

Friends Quiz: Who Said It - Rachel Or Phoebe?

The Big Bang Theory Quiz: Match The Profession To The Character

Friends Or How I Met Your Mother Quiz: Who Said It - Ross Geller Or Ted Mosby?

Friends Or How I Met Your Mother Quiz: Who Dated These Women - Joey Tribbiani Or Barney Stinson?

The Vampire Diaries Quiz: How Many Characters Can You Remember?