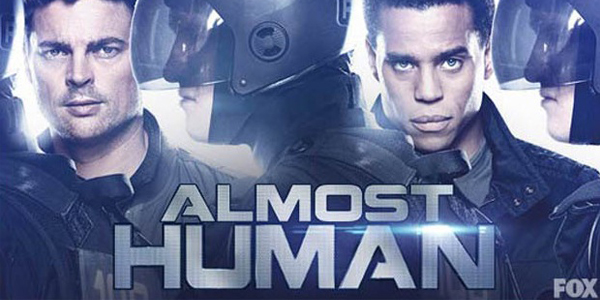 Almost Human, the new show from J.J. Abrams and J.H. Wyman, is a bit late to the party when it comes to the new fall television season, but was absolutely worth the wait. It would be easy for a high concept sci-fi show to fall short of its great premise, but Almost Human is wonderfully crafted and arrives on the scene with a bang, easily becoming one of the year's best new programs. The show was created by J.H. Wyman, the executive producer of Fringe, another Abrams sci-fi show that ended last year after five seasons. Whyman brings a lot of the same elements from Fringe that made that show so enjoyable, and elevates this buddy-cop procedural to new heights by laying the groundwork for strong character stories, a beautifully crafted universe to play in, and the promise of an underlying mythology that fans of Whyman and Abrams have come to expect. Karl Urban (Star Trek, Dredd) plays John Kennex, a cop in the year 2048, who has just woken from a 17-month coma after an ambush that cost him his leg, partner, and respect on the force. Crime has risen by a staggering 400% and all cops are now required to work with android partners, designed to take the emotions out of police work and operate on fact-based, logical programming. Kennex is less than keen on the idea (and blames one of these "synthetics" for the loss of his partner), and after destroying the android he was given, he's paired with an older DRN model named Dorian (played wonderfully by Michael Ealy). The DRNs are more human-like than their wooden, emotionless replacements, and were decommissioned for "bugs" in their emotional programming.

Urban brings the same gruff but loveable demeanor we know and love and is right at home here (returning to the small screen for the first time since Xena: Warrior Princess!). Ealy is the perfect counterpoint to Urban, and it's the chemistry between the two leads that drives the show forward. Granted, the show lays the foundation for what will surely be exciting story arcs for the season, so it's not just their interactions that make the show enjoyable. But they are incredibly fun to watch and their relationship will be one of the elements of the show that draws audiences back week to week. The script is filled with great dialogue, showing the differences between human and android, and Ealy immediately steals the show once his robot comes back online. Luckily for viewers, the writers spare us the tedious task of forcing their differing ideologies and attitudes down our throats, and by the episode's end Kennex and Dorian are at least comfortable working together and appear to actually be a good match for one another. Kennex is able to re-evaluate his distrust of "synthetics" and treat Dorian with respect. The two will undoubtedly butt heads throughout the show's run, but it's refreshing to see a show where the more trite storytelling elements are thrown out the window and the series is able to fully embrace its potential upfront. What also sets the show a step ahead of the competition is its phenomenal attention to detail regarding production design. We've seen countless versions of dystopian not-too-distant-futures, a lot of which fall flat on screen. The world of Almost Human feels lived in and real, and it's amazing that such visuals were achieved with a television budget. The aesthetic certainly isn't unique or completely innovative (the show owes much of its production design to movies like Blade Runner and Abrams' Star Trek), but it's engaging and simply one of the best looking shows on TV right now. Peppered with solid performances, smart writing, and intriguing world-building elements, Almost Human is sure to be more than just an entertaining show, and is a welcome addition to the impressive resumes of its creators. For fans of science fiction it's an absolute must-see, and and will undoubtedly strike a chord with general audiences as well. Overall, the show is incredibly impressive, well worth your time, and one of the best new shows in recent memory. Almost Human airs Monday nights on FOX at 8pm.
Want to write about Reviews and Almost Human? Get started below...
Contributor
James Garcia
Contributor
Twitter
Facebook

Brooklyn Nine-Nine Quiz: During Which Episode Did Amy Santiago Say It?

The Big Bang Theory Or Never Have I Ever Quiz: Who Said It - Howard Or Ben?