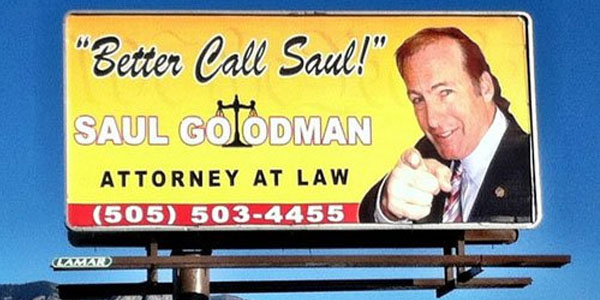 As of writing this article we only have 3 episodes of AMC's Breaking Bad left to go, but don't worry; the comb over mullet is sticking around. A Breaking Bad spin off prequel show about everybody's favorite Lawyer Saul Goodman has been announced. Fans appear to be split on the decision with some seeing it as a cash in on the huge success of Breaking Bad season 5. Here are 5 reasons why we should be excited to LWYRUP one more time... WARNING: Major Spoilers ahead for seasons 1-5

Simple enough. We will be getting more screen time with Saul. And lets face it, who doesn't love Saul Goodman? He is arguably the breakout star of the show, stealing the scenes he is in, which is no easy feat when you are acting opposite Bryan Cranston and Aaron Paul. Bob Odenkirk is clearly having a blast as Goodman, channeling his comedic roots and several of his characters from his HBO series 'Mr Show.' Odenkirk has developed and grown into a pretty intense drama actor. His scenes with Jesse in Season 5's 'Confessions' are a standout. It would be a shame to see Odenkirk stop playing a character he has made his own but not really had the full opportunity to explore, hopefully 'Better Call Saul' will give him that opportunity.
Contributor
Dan Perryman
Contributor
Twitter

Friends Quiz: Who Dated Them - Monica, Rachel Or Phoebe?

American Dad Quiz: How Well Do You Know Francine?

You'll Never Be Able To Name 100% Of These Villains From Breaking Bad!

10 Things We Learned From The Star Trek Lower Decks Trailer

10 Once Hated TV Characters That Made You Love Them

Friends Or Community Quotes Quiz: Who Said It - Chandler Or Jeff?

The Flash Quiz: Bet You Can’t Name All These Characters!

The HARDEST South Park Quotes Quiz On The Internet!