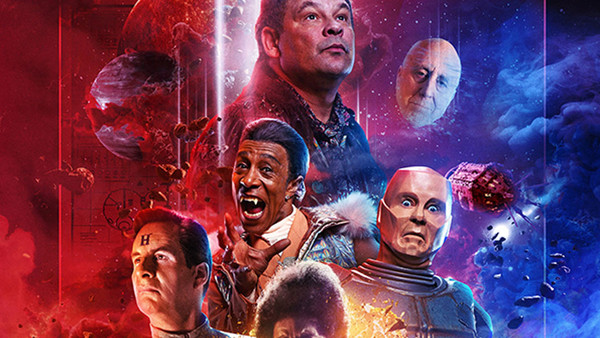 Red Dwarf is the special kind of TV show that has survived things other TV shows can never recover from, and a lot of that is down to just how loved the franchise is.

For 32 years the dwarfers have delivered a classic mix of mind-boggling, creative science fiction adventures with witty British comedy. Everyone involved in the production's commitment and passion for the show has also kept the wheels turning, as fans and the cast just want more of what the series brings to the table

Finally, after decades of waiting, fans are treated to a full-fledged film following the crew on yet another space adventure, only this time on a much grander scale.

The crew discovers the fleet of cats we last heard from in series 1, and discover they are now led by a tyrannical ruler who kills anyone not willing to worship him as a God.

The good news is that it's not complete Smeg, and fans will be overjoyed at just how good the final product is. From the writing to the bump up in scale it all delivers what you'd expect from a Sci-fi comedy movie starring Lister, Rimmer, The Cat and Kryten.

No spoilers ahead for this one, but before we get into what the movie does well there are a couple of stumbles it does make along the way.

First let's look at the negatives...

Despite the excellent visual quality, improved camera work, and overall bigger budget sheen, for some insane reason, the entire film was broadcast in the most irritating fashion.

The film actually opens with a classic Red Dwarf intro that spoils some of the biggest moments of the film off the bat. We're shown exploding objects, characters and some big visual jokes that basically ruin a lot of the plot.

It sticks out terribly and feels weird as the film already has introductory titles directly before, explaining the plot of the cat people for viewers who aren't fans. This leaves the film awkwardly opening for newcomers and then suddenly catering to fans.

Constant commercial breaks every 10 minutes also frustratingly broke up the film as each big reveal was met with a title card and a cut to black. Understandably adverts cannot be avoided on TV, but the film's pacing was set by these breaks rather than as its own thing so it is worrying how this will transition to home-media when watching it at home.

The inclusion of a laugh track is also puzzling as the last time the boys did a special it didn't include one. Maybe the fan backlash to series 7 and Back to Earth not having audience members cackling in the background swayed them to include it, but it's still odd to have in a feature-length movie.

If it's a movie, just let it be a movie. Hopefully, these issues are ironed out for the home release.

Crazy fan of MMA who also loves his films.

Friends Quiz: Who Said It? - Joey Or Ross?

Seinfeld: The Hardest Cosmo Kramer Quiz On The Internet

The Big Bang Theory Or Friends Quiz: Who Sang It - Sheldon Or Phoebe?

How I Met Your Mother Quiz: Who Gave Ted Mosby These Nicknames?

The Hardest Supernatural Quiz On The Internet!

10 Banned Pokemon Episodes From Around The World (And Why)