Sherlock is possibly one of the most genius shows that the BBC has ever produced and that makes Sherlock himself one of the biggest geniuses on TV. Whilst Benedict Cumberbatch's portrayal of Sherlock is interesting on many levels it is his many deductions, both arbitrary and important, that make the character and show what it is. Choosing his best ever deductions, feels like choosing Real Madrid's best players. They're all brilliant and sifting out the best ones is a near impossible task. Nevertheless, despite my better judgement, I have given it a go. Ranking them in order was too big a task so here, in chronological order are the nine best deductions of Sherlock Holmes. 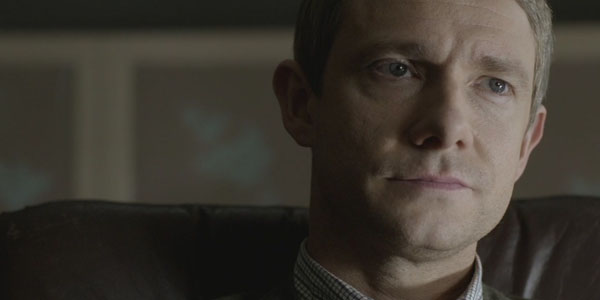 This deduction is absolutely essential to this list. This is the first time that we meet Sherlock and get to see his brain in action. He stuns his potential housemate, John Watson, into silence by asking him whether he has served in Afghanistan or Iraq. He goes on to describe intimate details of John's life. These include his strained relationship with his estranged brother, the breakdown of his brother's marriage because of his alcoholism and the fact that his limp is psychosomatic. The ways in which he deduces these things is, in typical Sherlock style, brilliant in the simplicity of it. John has tan line on his hands with no tan below the wrist. This tells Sherlock that he has recently been abroad but working not on holiday. His stance as he entered the room and his mannerisms tell Sherlock that he is a military man and this leads to 'Afghanistan or Iraq', for example. Of course, Sherlock does make one mistake. John's 'brother' is actually John's lesbian sister. She is an alcoholic, however, and her relationship did break down. The mistake only serves to make Sherlock seem vaguely human and this scene is one of the most striking character introductions in TV.
Contributor
Sam Meadows
Contributor
Facebook

The light... It hurts my eyes... 20 year old student with too much time on my hands. Aspiring journalist and passionate about all things film and television related.

10 Rick And Morty Fan Theories That Change Everything

The Mandalorian Season 2: 10 Reasons To Be Excited New

10 TV Shows That Re-Used Props From Other Shows

Friends Or The Big Bang Theory Quiz: Who Was It - Ross And Rachel Or Leonard And Penny?

Friends: Only Chandler Would Score 100% On This Monica Quiz!