8. History Is Altered In Yesterdays Enterprise 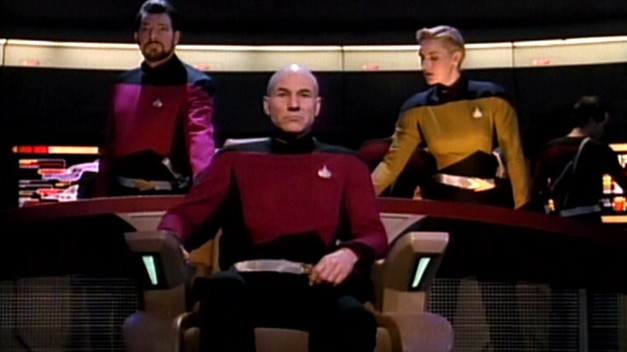 Yesterdays Enterprise was the first classic episode of Star Trek The Next Generation. It took a story idea used across many sci-fi showsthe creation of an alternate universein a bold and exciting direction. The idea that one event marked the difference between the Federation we know and one that is loosing a bitter war with the Klingons allowed that episode to reveal a startling and harsh reality where everyone we know could die. It begins with the appearance of the ships predecessor, the Enterprise C, through a rift in time. That alone is enough to intrigue the audience. But what happens next is shocking. History has been changed and our characters with it. The Bridge (indeed the entire vessel) is darker as if in a constant red alert. Every member of the crew wears a phaser. The collars of their uniforms are higher, more severe. Deanna Troi and her chair are goneno need for counsellors in a time of war. Worf too is absent. And Tasha Yar is alive. Theres no time to reflect on what has happened. Suddenly we are in a different show. The characters react to Tasha because she is very much part of this new environment. As the computer announces a fleet formation briefing in 1400 hours and we witness a confused Guinan in Ten Forward state this isnt right, we find ourselves thinking the same thing too!
Contributor
Baz Greenland
Contributor
Twitter