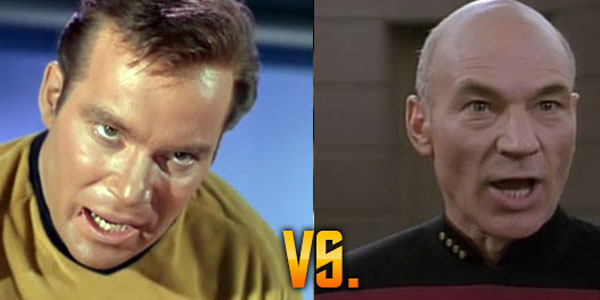 1987: Star Trek fans were presented with a new series, a new captain  and a new dilemma. Who was the better captain? William Shatners presentation of the Iowa-born James Tiberius Kirk compared to Patrick Stewarts French Jean-Luc Picard gave us two completely opposite captains. One, reckless, and ready to rush in where angels feared to tread versus another, who was a more intellectual and cerebral personality, given to careful planning and methodical in nature. But there was more to differentiate between these two captains than just this general description of their natures. After the completion of Star Trek: TNG, other captains from other series appeared who seemed to complicate the issue even further but actually gave us new ways to appreciate the two first captains. The standard benchmark has always been the original captain: James Tiberius Kirk; and the most common comparison has always been the captain with the longest televised run-time: Jean-Luc Picard. However, the key here is to decide what is the definitive and relevant criteria. We'll discount Picard's advanced 24th century technological superiority compared to Kirk's 23rd century technology. We'll also eliminate Kirk's obvious romantic advantages along with a perfectly full head of hair. Those would be too easy. So, in order to definitively decide, let's take a look at criteria germane to both captains that will allow us to settle the argument once and for all, who is the better captain  Kirk or Picard?
Contributor
John K Kirk
Contributor
Twitter

John Kirk is a Teacher-Librarian and currently a History/English Teacher with the Toronto District School Board. But mostly, John teaches Geek. Comics, Sci-Fi (Notably Star Trek), Fantasy and Role-Playing and table-top games all make up part of John’s repertoire, There is a whole generation of nerds-in-embryo who rely on him to make sense of it all, to teach that with great power comes great responsibility, that the force will be with us always and that a towel IS the most useful thing to have in one’s possession. When John isn’t in the classroom, he can be found in his basement writing comic reviews for www.popmythology.com and features for Roddenberry Entertainment's www.1701news.com.

Friends Quiz: Which Of These Guest Characters Said It?

8 Better TV Series That Were Secretly Hidden In Shows

The Lord Of The Rings: The Rings Of Power Episode Six Review - 6 Ups & 3 Downs

The Big Bang Theory Quiz: Who Said It - Penny Or Kaley Cuoco?

Friends Quiz: Who Kissed These Men - Rachel, Monica Or Phoebe?

Brooklyn Nine-Nine Quiz: During Which Episode Did Raymond Holt Say It?

Supernatural Or The X-Files Quotes Quiz: Who Said It - Dean Winchester Or Fox Mulder?

Brooklyn Nine-Nine Quiz: During Which Episode Did Rosa Diaz Say It?