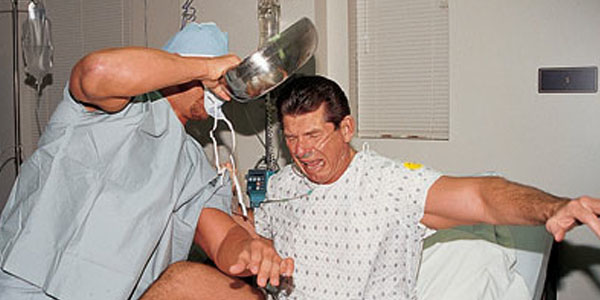 WWE.com"There is no sick". That was a direct quote from Vince McMahon to me, while I tried to work through a pay-per-view and TV taping when in actuality I should have been in a hospital. Yes---I was that sick. I dont remember the year, or the event, all I remember is Ken Shamrock and The Rock had a match. I was so sick backstage that I was actually soaking wet with sweat, as I watched the show wearing a heavy over coat while SHAKING. I just wanted to go home---thats it. But, when you work for Vince---you go to work, there is no other option. That infamous line came from Vince the night prior at our production meeting when I was on the verge of DEATH while sitting next to him. After about an hour into the meeting, Vince looked at me somewhat annoyed and said, Whats wrong with you? Vince---Im Sick, I said. Vince looked me dead in the eye and delivered the line, THERE IS NO SICK. I never forget that to this day. And trust mehe wasnt kidding. This is a guy who gets IRRATE when he sneezes. IRRATE! You know why? Because he couldnt CONTROL the sneeze. He also never---NEVER---wears a coat in the winter regardless of how cold it is. The frightening thing was that his son, Shane, was slowly, but surely, talking on all his fathers quirks.
Contributor
Vince Russo

10 Wrestling Promos That Pissed Off Wrestlers

If Triple H Is "Back" In WWE, What About The NXT Creative Team? New

Report: AEW Was Expected To Cut THIS Wrestler Until Talent Spoke Up

AOP's WES UK Show Has Been Cancelled (And It's An Absolute Mess...)