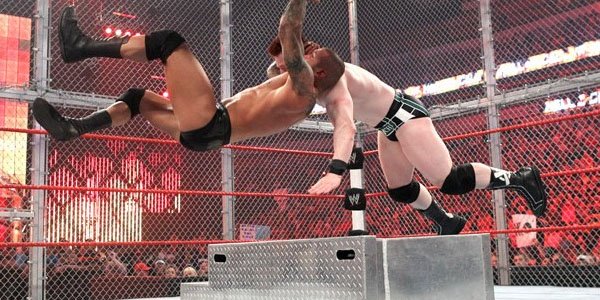 WWE.comProfessional wrestling can easily be summed up as the world's most violent soap opera. The guys in the ring spend years learning and perfecting their craft, honing their skills between the ropes to ensure the complete safety of their opponent and the total enjoyment of the audience. A great example of a crowd pleasing manoeuvre, Randy Orton's finisher the RKO (pictured above) is a high impact, visually pleasing move that carries little to no risk for both Randy and his opponent. But some moves aren't always as safe. There are techniques in wrestling that the WWE generally do not allow, as they are deemed far too dangerous for even the highly trained professionals to do. Take a look outside the WWE however and you'll find plenty of what could only be described as clinically insane daredevils willing to attempt these feats for a shot at wrestling glory. Grab a hold of your seats and get ready to wince repeatedly as we count down ten moves that no sane individual would even consider attempting.
Contributor
Mark Bradley

Just a jolly ol' pop culture nerd living just outside London in England. I dabble in a little bit of everything but specialise in wrestling, gaming and comic books.

AEW Favourite Suffers Injury At Battle Of The Belts III

Ranking Every WWE To AEW Move From Worst To Best New

4 Ups & 2 Downs From AEW Battle Of The Belts III

Which Titles Changed Hands At AEW Battle Of The Belts III?

10 Wrestlers Who Got Pissed Off At Critics