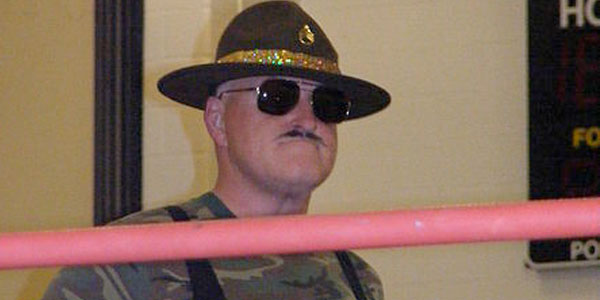 The great Sgt. Slaughter follows, due to the unbelievable gimmick he adopted to garner his heat. Casual wrestling fans may know Slaughter as the great patriot of the USA who stands for all that is noble and respected in the American soldier. When he first departed the WWF in 1984 he was the second most popular face superstar behind Hulk Hogan. How could he possibly be a heel champion? Back in the early 1990s, the WWF rehired Sgt. Slaughter, and decided to use his character in relation to the Gulf War that was currently being waged. However, Slaughter would turn his back on America, and become an Iraqi sympathiser. I know what youre thinking, and yes it seems that if Muhammed Hassan had been around in the 1990s hed have been a champion rather than a regrettable mistake. Slaughter won the WWF Championship at Royal Rumble 1991, beating the Ultimate Warrior, and would lose it at Wrestlemania VII to Hulk Hogan. He was essentially a transitional champion, but perhaps the greatest transitional champion of all time. The heat that he generated as champion led to him receiving death threats and being forced to travel wearing a bullet-proof vest in public. Therefore, one cannot help but regard him as one of the most hated heels of all time, and worthy of his place on this list. At ease Serge.
Contributor
Callum Wiggins
Contributor
Twitter

Which One Off WWE Mega-Match Was Supposed To Happen THREE Times? New

Which WWE Star Would Big Show "Love" To Work With? New

Ex-WWE Star Says Company Are "Shooting Themselves In The Foot"

Which WWE Icon "Didn't Want To Be A Wrestler"?