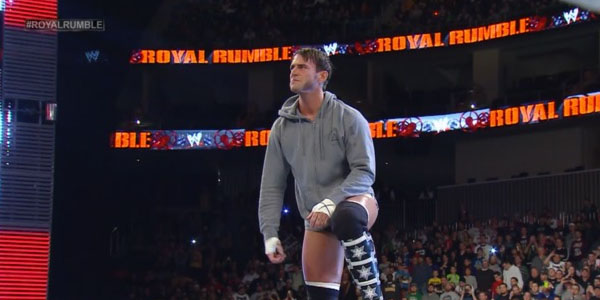 Copyright: WWE Royal Rumble 2014 Blu-rayPhilip Jack Brooks, known to fans and friends as CM Punk, has been one of the most divisive figures in professional wrestling for quite a long time now. Never afraid to speak his mind, or backward about coming forward, hes rubbed a lot of people up the wrong way for a variety of reasons. But the most polarising thing hes ever done  more so than turning on Ring Of Honor fans in the first Summer Of Punk, more even than his notorious worked-shoot promo in June 2011 which led to the second Summer Of Punk in WWE  was abruptly leave Monday Night RAW on 27th January 2014. And he didnt come back. Punks played with this kind of thing before, so a little boy who cried wolf reaction on the part of wrestling fans the world over was understandable. It was a work, they nodded to themselves wisely. They asserted that hed be back for the next RAW in his hometown of Chicago. Then, when he didnt show up, they were sure hed be back for Wrestlemania XXX. Think of all the money hes missing out on, they said. Hell come back for the biggest show of all, they said. Of course, CM Punk didnt come back. And the longer it went, the more people stopped predicting when hed come back and started sniping at him for leaving. Even the staunchest of Punk supporters have begun to feel a little bit narked over the last few months. Where is he? With CM Punk chants dying out and life in WWE going on without him, his approval rating appears to be at an all time low, both with the crowd and with the WWE roster that used to think of him as a mentor figure. Here are a dozen of the reasons why that might be.
Contributor
Jack Morrell
Contributor
Twitter

Professional writer, punk werewolf and nesting place for starfish. Obsessed with squid, spirals and story. I publish short weird fiction online at desincarne.com, and tweet nonsense under the name Jack The Bodiless. You can follow me all you like, just don't touch my stuff.

Why WWE Was RIGHT To Make Randy Orton WWE Champion