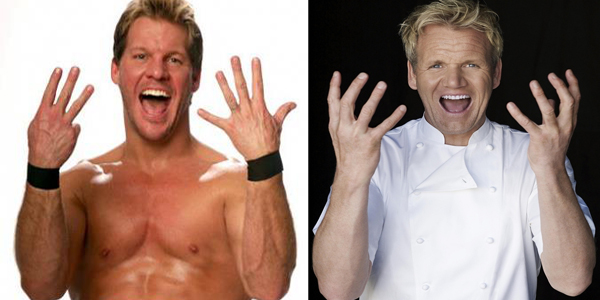 In folklore, seeing a doppelganger was not only a sign of bad luck, but also an omen that illness and death were on the horizon. Nowadays, a lookalike is less foreboding and the most you will have to put up with is double takes from strangers. Take the wrestlers that make up the troop of the World Wrestling Entertainment, image is everything and sometimes more important that in ring ability. No one remembers The Great Khali for his 60 minute submission matches. But maintaining a hard man image is not easy. One step in the wrong direction and all your attempts to look like a force to be reckoned with will be met with ridicule and disbelief. And it is twice as hard if due to unfortunate genes from your mother and father, you grow up to resemble someone that completely contradicts the image you are trying to create. So what can you do if your face makes you resemble someone you rather it didn't? What if your face lets you down? Plastic surgery? Unfortunately there is not much you can do except learn to live with it. Much like the following 23 Wrestlers you will see. Some of them have in-ring talents that overshadow any lookalike problems they may have while others might as well add it to the list of problems they have as a pro wrestler. So click Next and prepare to see 23 unfortunate lookalikes that you will struggle to forget next time you watch WWE.

He might be the ''the best there was, the best there ever will be'' but he can also add ''founding father of America'' to further extend his ego. At one time you would be forgiven thinking that Ozzy Osbourne was delivering a promo with Bret Hart's voice but now the round glasses have gone and with his greying hair, he has become the dead spit of Benjamin Franklin.

Remember Zordon from Mighty Morphin Power Rangers? He was the godlike figure that guided them, gave them advice and sent them on missions, basically had the same job that Paul Heyman has under his current role as advocate for Brock Lesnar.
Contributor
Amarpal Biring
Contributor
Twitter
Facebook

Vince McMahon Told This WWE Wrestler He Was "Too Polished, Nice, & Clean"

10 Wrestlers That Told You They Were Pissed

Sasha Banks Says THIS WWE Legend Is Dodging Her

Sasha Banks NOT Returning For The Mandalorian Season 3