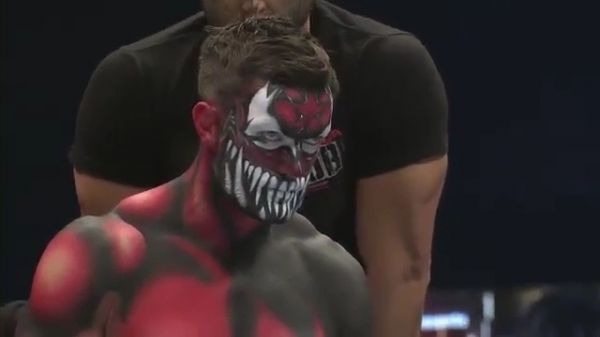 Prince Devitt may be the hottest commodity on the independent wrestling scene right now which has led to continuous speculation that he will inevitably sign a deal with World Wrestling Entertainment. However in an interview with the Low Blows podcast this week Devitt was quick to shoot internet marks down in flames when he denied his affiliation with WWE. Devitt  real name Fergal Devitt  has just finished up his dates with New Japan Wrestling after 8 long years. No sooner had word leaked of his imminent departure from the company were internet smarks flooding the forums with exclusive confirmation of his new partnership with WWE. Shortly after the WWE rumours began someone somewhere started another about TNA literally throwing money at the high flying superstar in a bid to sign him themselves and position him as the new focal point of their entire brand. The truth however is much less glamorous  Devitt will be working on his home soil here in the UK and in Europe for the foreseeable future.

Theres been a lot of talk and speculation about me doing TNA, WWE, and NASA projects but at the moment Im happy doing my thing at home. There is a possibility that I might go to the States in the future for a potential opportunity there but until then its all just rumours and speculation unfortunately.

This could all be a way of keeping Devitts debut a surprise however but given his lack of mainstream recognition to the casual fan its unlikely that this is the case. Denying the signing of a marquee name like Sting makes sense but for a guy like Devitt  amazing as he might be  it seems a little unlikely. How do you see WWE utilising him on the main roster? Will he be an instant hit with fans or does he need NXT exposure before he appears on RAW/Smackdown? Let us know what you think about the whole Prince Devitt situation in the comments section below.
We need more writers about Prince Devitt! Get started below...
Contributor
Matt Aspin
Contributor
Twitter

10 Wrestling Moments That Couldn't Live Up To The Hype New