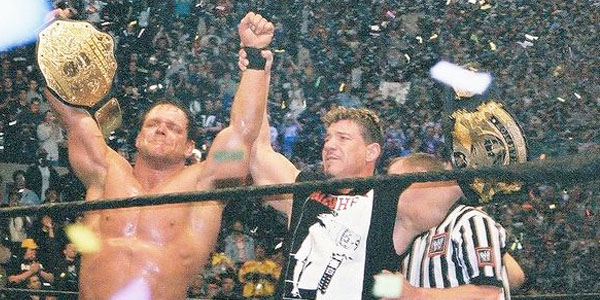 He may have been excellent in the ring, but viewers were tuning out for Chris Benoit in 2004. Pay per view buy numbers had been steady in the WWE up until Benoit became the focus of Raw in March 2004. All of a sudden business fell off a cliff. The WWE lost around 100,000 PPV buyers from the year previous in the period that Benoit was Champion. Granted, we can attribute the loss of business to other factors too - Rock gone, Austin gone, injuries. But let's not make excuses for Benoit, it was his job to maintain the level of sales and he failed. In terms of numbers consider this. Benoit's first event as Champion was Backlash 2004. It garnered 295,000 buys, down from 345,000 buys a year earlier. The decline under Benoit continued, Bad Blood 2004 was in at 290,000 buys, down from 385,000 in 2003. Such was the lack of faith in Benoit following dismal character performances on Raw, the WWE instead decided to put Triple H vs Shawn Michaels on last for the Bad Blood PPV- Benoit as Champion was just not getting over as an attraction. His dull as ditch water personality is undoubtedly the main reason people didn't buy into Benoit. His diminutive and unattractive appearance didn't much help matters either. Call it superficial, but WWE fans are indeed a fickle bunch. Looks matter in peoples perceptions of a champion. Every PPV that 'The Crippler' appeared as Champion on was down from the previous year, WWE had taken a massive gamble and it hadn't paid off. The decision was made to change gears, with a new era in mind, Benoit jobbed the title to Randy Orton at Summerslam 2004. Say what you will about the business being in decline, the fact is it accelerated under the World Title reign of Chris Benoit.