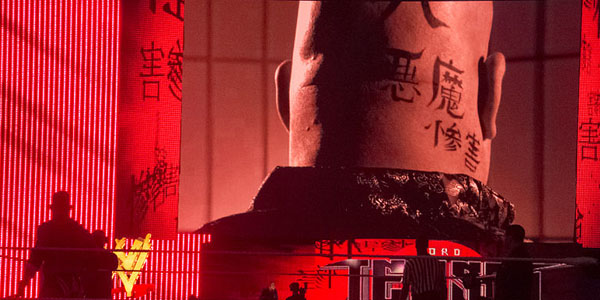 Wrestling Observer Newsletter reports that Lord Tensai will get a complete overhaul and makeover as a character after being dubbed "a flop" by Vince McMahon. Matt Bloom, the former A-Train and Albert returned to the WWE shortly after WWE WrestleMania 28 and was given the gimmick of a Japanese warrior, which played up the success Bloom had enjoyed overseas since he originally left the WWE in 2004. Tensai was given a big push upon his reintroduction but the decisive moment for the character came when he failed to impress WWE officials in his pinfall victory over John Cena at the main event of the April 16th Raw SuperShow in London. Tensai's victory was to eventually build to a Tensai vs Cena feud that would culminate in matches at WWE Over The Limit and WWE No Way Out pay-per-view events but that poor performance led to a change of plans which now sees Big Show taking Tensai's spot in the feud. WWE also had planned summer live show main events of Tensai & John Laurinaitis vs John Cena, but Big Show has now taken Bloom's place in these matches. McMahon and WWE officials are now looking over how they can already repackage Tensai after two months of failure. Although he has yet to be defeated on television, Tensai this week suffered his first pinfall loss before a WWE crowd in a dark match against John Cena following the Raw SuperShow on Monday night. He is now expected to be a regular on WWE Superstars whilst his character is tweaked and re-tooled. Some of the changes for Tensai have begun already. He has lost his robe, is wrestling more aggressively lately and has already had the "Lord" dropped from his name in the past fortnight.
Want to write about exclude, Vince McMahon and Albert? Get started below...
Editor-in-chief
Matt Holmes
Editor-in-chief
Facebook

Predicting The Next 10 AEW Stars To Jump Ship To WWE

Report: CM Punk Went Into Business For Himself On AEW Dynamite

10 Wrestlers Who Walked Out On Live TV

WWE NXT UK To Be Replaced With WWE NXT Europe