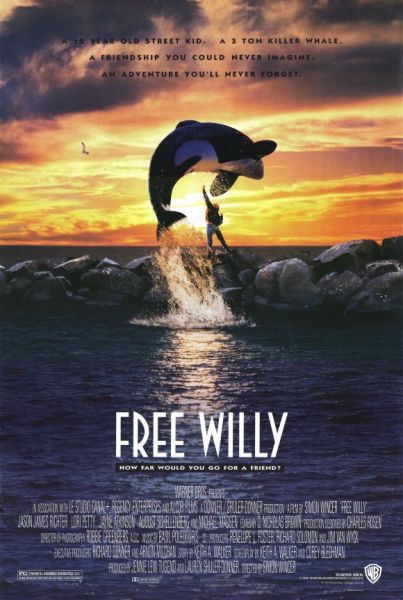 The one with the giant whale, the boy who loves him, and their struggle to be together. An actual whale. Look, there he is careening from beneath the water's surface, to freedom.

Back before the film was released, to the uninitiated the title Free Willy suggests there was going to be some sort of imprisonment for the giant beastie, who would thus need to be freed. And the mulleted boy star would have to venture forth through the battlefield of red tape and meanie bureaucrats to return him to the wild, before being crowned Greenpeace's man of the year.

Well, the poster saves you any of the palpitations you may have suffered over the possibility that Willy was not going to make it. Compromising the film's drama entirely, and making it a painful trek towards the inevitable, with cliched characters and hokey dialogue, the poster decided to use the film's one iconic image, thus spoiling entirely the finale. See, there he is, completely free.