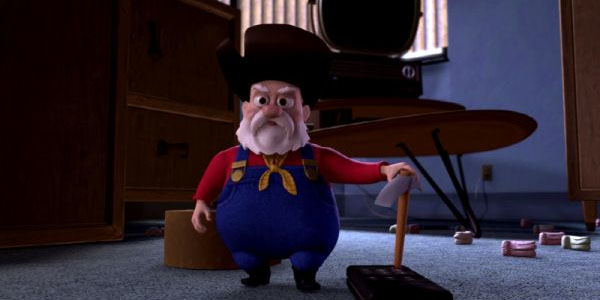 The charmingly named Stinky Pete is another villain from Pixars first sequel, and he is a character that has always managed to stir up annoyance and hatred from me whenever I watch Toy Story 2, so I therefore see him as good at his role of, in my view, the film's ultimate villain.

Throughout Toy Story 2 Stinky Pete The Prospector is presented as a lovable, kind and possibly even buffoonish character, due to how he is depicted in the Woodys Roundup TV show, but most of all he is seen as a father figure to the confused Woody and abandoned Jessie and Bullseye.

This "kind old man" figure that Pete projects throughout the film is aided by the brilliant casting of Kelsey Grammer, whose charming, deep voice, which seems full of wisdom and knowledge, helps to create a character that appears to be loyal and a true friend to Woody and his Roundup gang.

The great thing about Stinky Petes character is that all of this is false; he is not a kind or lovable figure, and instead is a selfish toy, warped due to his own miserable experiences into a rather mean and self-centered character that is very willing to sacrifice everyone elses fate and destiny as long as he gets what he wants, to be preserved and loved by children forever in the Konishi Toy Museum.

His true menacing character can be seen in the scenes in the airport when Petes pick goes from being a toy accessory to a real and very threatening weapon, with which he tears open Woodys arm and is willing to carry on slicing away if it means getting all the gang to the museum.

Thankfully, Pete is stopped and Woody, Jessie and Bullseye arrive back at Andys house to be played with (well, at least for a few more years), while Pete gets his comeuppance by being taken by a young girl who seems to think Pete will look better with a nice make-over.

Massive Pop Culture fan with aspirations of one day ruling the world. When I grow up I want to be Don Draper, Jack Sparrow, Han Solo and Tyler Durden all rolled into one. Follow me on Twitter @JoeMcFarlane3 and check out my blog; http://popcultureaddicts.wordpress.com/