10. Monty Python And The Holy Grail  They Used Coconuts Because Horses Were Too Expensive 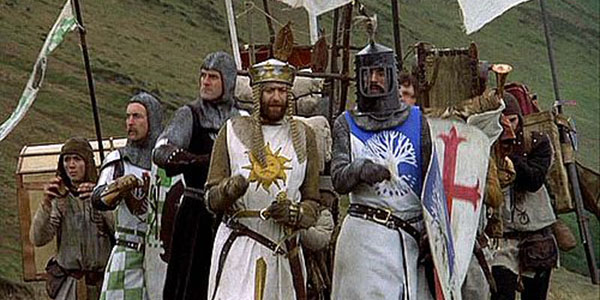 Aside from the singing, dancing and the Knights Who Say Ni, the most iconic thing about Monty Python and the Holy Grail was probably the coconut clopping/imaginary horse riding. Watching a man pretend to ride a horse with a crone slapping shells together behind him was silly, surreal and often hilarious  effectively the Python trifecta.

You might think that they came up with this joke well in advance of actually filming  after all, as Ive just said, its perfectly within the Python vein of humour. Yet youd be wrong. The joke, as iconic as it is, was an off-the-cuff result of budgetary concerns.

To use less accountant-esque words, the money was tight and they simply couldnt afford horses. This put them in something of quandary  knights are supposed to ride on horseback, and the Python troupe were playing the most famous knights of all time. Yet what they could afford was another actor and some coconut shells and strange walking motions that made you look like a cantering Egyptian. Armed with this knowledge, the Python boys did what they did best and the rest, as they say, was history.

Oscars 2021: Final Predictions In All 23 Categories