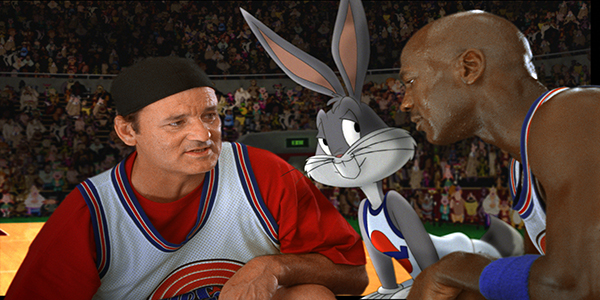 Warner Bros. Family EntertainmentObjectively speaking, Space Jam is not a spectacular film. However, it has become a definitive cultural icon of the nineties, and therefore deserves a spot on this list. In case you've been living under a rock, Space Jam tells the fictional tale of Michael Jordan's initial return to the NBA from retirement. One day, in Looney Toon Land, tiny aliens called the NerdLucks arrive and attempt to take the Looney Toons as slaves to work at their amusement park. Thinking quickly, Bugs Bunny bargains the Toons' freedom by challenging the short NerdLucks to a basketball game, believing that it will be an easy win. However, after the NerdLucks steal the talents of NBA stars such as Patrick Ewing and Charles Barkley, the Looney Toons realize they're in deep water, and request the help of Michael Jordan. Although Space Jam got mixed reviews, it is still beloved by nineties kids everywhere. With an all-star live cast including Bill Murray, Larry Bird, and Wayne Knight (Newman from Seinfeld), Space Jam opened at number one and grossed 230 million dollars worldwide. Recently, people have been calling for a remake featuring LeBron James, but we all know there will be only one Space Jam in our hearts.
Contributor
Alec Belmore
Contributor
Twitter

Alec Belmore hasn't written a bio just yet, but if they had... it would appear here.

10 Movies Way Freakier Than You Thought

Harry Potter Quiz: Can You Remember These Hogwarts Students?