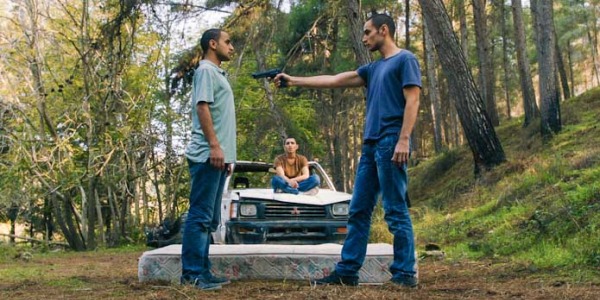 Omar is "noirish psychological thriller" from Palestinian director Hany Abu-Assad. It's his fourth feature film, and it won him the Un Certain Regard Jury Prize at this year's Cannes Film Festival. Abu-Assad is otherwise best known for his Academy Award nominated film Paradise Now. Omar will be shown on Tues. 11 at 7:30PM, Wed. 12 at Noon and Sun. 15 at 9:30PM as part of the Special Presentation programme. http://www.youtube.com/watch?v=jkCnA5UOI94 When the Separation Wall was built in the West bank, it split many towns in half, cutting Omar off from his friends Amjad and Tarek- forcing them to scale it every time they want to hang out. Omar is also in love with Tarek's younger sister. When a soldier is murdered, an Israeli officer who has it out for Omar, tricks him into becoming an informant- forcing him to choose between conflicting loyalties. The Globe & Mail has noted that this film is, "considered the first feature fully financed within the Palestinian cinema industry", which should be reason enough to support it- with hopes it will help their National cinema flourish. Other early Cannes reviews have mentioned how the film has a very overt anti-occupation message. Which is to be expected.
Contributor
Josh Cornell

I'm Josh. I was born and raised in the Niagara region. I'm an avid cinephile, dedicated archivist and pirate. I'm also an anarcho-punk fan that rides a bike, enjoys going on hikes, and really likes fruit....a sort of hippy-punk hybrid, if you will. I graduated from Brock University with an Honours degree in Political Science and an unofficial minor in Film. I enjoy writing learning, reading and writing about politics, film, and punk related issues. I hit shows in TO pretty often and look forward to checking out new films at TIFF every September.

10 Upcoming Movies That Are In Big Trouble

10 Rules To Survive A Horror Movie

7 Strangest Things Actors Had To Do To Win Movie Roles