Im going to start by boldly/naively stating that I am not as big a fan of horror as I could be or indeed as many of you are likely to be. Yet I do have faith in the genre, I believe it to have the possibility and potential to make classic cinema, the obvious likes of Alien and The Shining are fine examples of that. As horror continues on into the 21st century there are one or two pieces of cinematic gold for every dozen appalling slasher sequels, monster mash-ups and vampire flicks. Below is a list of 10 filmmakers, writers and actors who I guestimate could be crucial to the future of horror. So here it goes, a horror rookie looking into the possible future crystal ball of the genre with some very safe predictions (filmmakers that have already proven their craft) and a few more riskier suggestions.

The man behind the mash-up fad, this writer kick started a sub genre of kinds with the novel Pride & Prejudice & Zombies in 2009, then going on to write Abraham Lincoln, Vampire Hunter a year later. These literary mash-ups hit a nerve with society it seems, leading to mass success in literary form selling multi-millions of copies! Both novels are being adapted into films as we speak and Seth Grahame-Smiths postmodernism could be fascinating; Im thinking Edgar Wright and Tarantino off the top of my head, but when am I not? Russian auteur Timur Bekmanbetov (Wanted) is in the directing seat for Abraham Lincoln, while Grahame-Smith writes and interestingly Tim Burton produces. Grahame-Smith has penned Burtons next film, the extremely promising Dark Shadows. It seems inevitable that Seth Grahame-Smith (at the very least his style) will be a strong part of horrors future. This writer has that postmodern edge which rules supreme at the present; lets just hope this popular culture has some real substance and isn't just a gimmicky style.

No surprises here. Those twisted so and sos who brought you the Saw franchise and last years Insidious definitely have the potential to be horror legends. Saw (2004), easily the best of the series and the most innovative, was a fresh and disturbing flick, although it could be seen more as a curse than a blessing with all those stagnant sequels that followed. You cant really blame the corrupt collaborators for milking a franchise for all it was worth though can you, and with Insidious theyre not just one trick ponies, the film which saw a Bieber-like kid possessed, packed the scares whilst still feeling like filmmakers slowly finding their feet. If James Wan (director, producer) and Leigh Whannell (writer, actor, prodcuer) can continue to build with each new film then they may be in that horror hall of fame sooner than you think. The pair have a string of projects in the works yet nothing concrete as of present.

To those who are currently shrugging their shoulders, Edward Hogg is a British up-and-coming actor who starred in 2009s Bunny & The Bull as well as Brothers Of The Head and the series finale of Misfits (playing none other than Jesus Christ, well not thee Jesus Christ). This unconventional actor gave a terrific turn as Jesco White in the dirty, deranged White Lightnin and Mr. Hogg seems destined to play a horror icon in the future. (All the above films are highly recommended btw). Could he be the next Robert Englund? Who knows, but he is definitely an actor to look out for, his distinct look and courageous acting talents mean hes got what it takes to be the next Hannibal Lector. Its just a matter of time, keep an eye on this artiste.

If any contemporary director is making horror accessible to the critics as well as pleasing the popcorn munching public its got to be Park Chan-Wook, the masterpiece that is Oldboy may be more of a psychological nightmare rather than an out and out horror, yet Thirst proves hes got horror sensibilities, creating one of the finest contemporary vampire films amongst a sea of Twilight wannabees. Currently the auteur is filming Stoker, which is an enigma in itself, penned by Prison Breaks Wentworth Miller of all people. I think this Korean director has great potential in the horror scene though, see Sympathy For Mr Vengeance and Sympathy For Lady Vengeance also.

Anyone whos witnessed all 94 minutes of this melancholic French director's film Martyrs will understand why hes on the list, that film alone is a journey into the darkest depths of man with certain scenes now forever burned in my retinas. I know its all blood and make-up but man does it leave an impression. I caught this little gem of disturbia one lonely Friday night and was hooked, this torture porn for the diehard fans proves Laugier is an innovator with so much more to offer. Ive yet to see his debut Saint Ange (House Of Voices), but he has a third movie in the works titled The Tall Man, starring Jessica Biel. Another director to watch out for, this guy understands the genre but enjoys spinning it on its head whilst forever disturbing his audience, you owe me one Laugier.

The splat packs very own Mr Eli Roth is a somewhat criticized man, his Hostel films have gained a lot of stick in the past not to mention his cringe worthy acting, yet this egotistical director has got talent. His debut Cabin Fever never lived up to its hype yet was a decent enough horror flick, and although a year later he came onto the gorno scene with the Hostel movies that are the better of its subgenre. I think Mr Roth has great potential; hes forever honing his skill, at the moment hes a ball of clay, but possibly the long talked about Endangered Species may place him back on the horror map. From analyzing his cinematography and tension building (we studied one particular scene from Hostel: Part II which involved a scythe over and over in Film Studies) you get a sense that behind all the manipulation and bravado, this guy knows what hes doing. Hell if Tarantino backs him, then he must be doing something right. 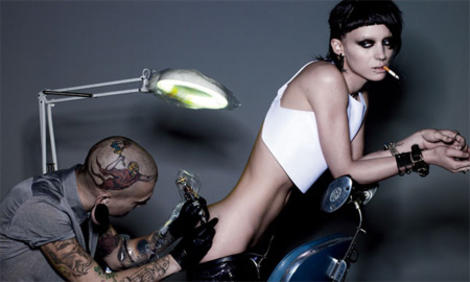 This actress is soon to be on everyones radar come Christmas, with the controversial release of Finchers The Girl With The Dragon Tattoo. From interviews and the trailer alone it looks clear that Rooney Mara has made Lisbeth Salander her own, with the Oscars surely to be knocking on her door next year. Mara's brave and bold career move proves shes a force to be reckoned with, an actress seeking out tough, complex roles. Rumour has it that she could be starring in Spike Lees Oldboy remake also, which wouldnt seem too implausible. Shes already starred in Bayers A Nightmare On Elm Street remake, so she clearly has this horror sensibility, well just have to wait and see where this goes next, yet Id put good money on her defining the future of horror, maybe the next Sigourney Weaver, as she has the acting chops and a determination to tackle these difficult roles.

Shrugging your shoulders again, well this English filmmaker directed Eden Lake and next year's The Woman In Black (the Daniel Radcliffe/ Hammer vehicle) as well as writing My Little Eye and The Descent Part 2. Hes the British epitome of a fresh new horror sweeping through the country, using home grown talent and settings to scare the masses. He's developed a cult fanbase. Eden Lake was definitely a nightmare scenario, and a film which angered me come the closing credits, yet with The Woman In Black he looks set to hit the big time, the trailer treads that fine line of creepy and Harry Potter looks well suited. Watch out for this guy, hes got horror running through his veins.

And finally, the disturbed French filmmaker himself, Gaspar Noe. I drive my friends mad talking about his masterpiece Irreversible, yet it is a clever little film, one though that can be impossible at times to watch. We all know of the unforgivable 10 minute scene centre of the movie and the windy opening scene which takes us through a dark, demonic underworld ending with, lets say, a fire extinguisher. But the man has horror credentials, Irreversible is a controversial film, a tough viewing experience, but isnt that horror at its best? His subsequent film Enter The Void was one half masterpiece the second half pretentious drivel but once again, a filmmaker pushing the boundaries of cinema. If Mr Noe dips his foot into horror once more, then something well and truly fresh and menacing will come from it. So what do you think to my list? Who do you think is going to hit it big with horror in the future? Who did I miss out?
Want to write about Tim Burton, Eli-Roth, James-Wan, Edward Hogg, Seth Grahame-Smith, James Watkins, Rooney Mara, Gaspar Noe, 31 Days of Horror, park chan wook, Leigh Whannell and Pascal Laugier? Get started below...
Contributor
Adam Lock