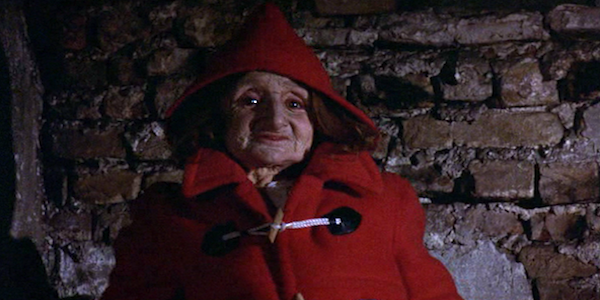 Nicholas Roeg's terrifying, haunting, keep-you-up-at-night-because-you're-too-scared-to-turn-the-light-off horror classic is all about the patient build- up - it's a movie that, essentially, works because you slowly move towards its horrifying climax, almost without expectation. Without it, it's a good movie, but with the ending, it becomes a truly great one. The story takes place mostly in Italy, with a couple, played brilliantly by Donald Sutherland and Julie Christie, who take a trip to Venice in order to take their minds off of the accidental death of their child, who drowned in a lake. For much of its runtime, Don't Look Now lingers in a state of unease - it's an uncomfortable watch, filled with a few weird, edgy scenes, but it's all about the atmosphere in the beginning. Then comes the finale, as Sutherland spots a small figure clad in a red coat moving through the claustrophobic, foggy back streets at night - is it his daughter, back from the dead, who died in a red coat? Nope: it's a disfigured dwarfen serial killer, who proceeds to slash his throat with a razor during one of the most heart-pumping reveals in cinema history. At this point, we're shocked and drained, and Don't Look Now has gone from creepy horror flick to gut-wrenching classic.
Contributor
T.J. Barnard