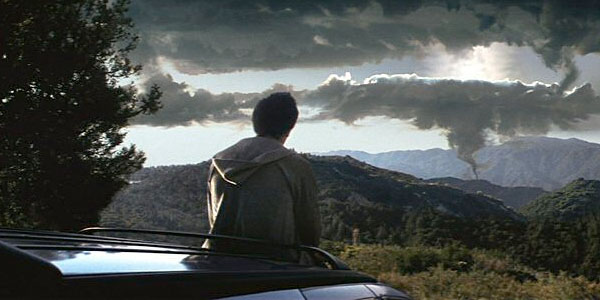 Plot Summary- Jake Gyllenhaal plays Donnie Darko, a troubled teenager who is warned by a big, blue bunny named Frank that the world has 28 days left before it is destroyed. Seth Rogen plays a bully. Why is it confusing? You know, that film that's always free with the paper. Richard Kellys cult breakthrough is the opposition to Memento when it comes to straightforward films told awkwardly, mainly due to the fact that its actually a really good, thought-provoking tale about love, fate, fear and all the other emotions. Its cult success lies in the fact that its often non-linear narrative is accompanied by enjoyably comic scenes, brilliant cinematography, and great performances from almost every a-list celebrity going, including Patrick Swayze as a pedophile. If you didnt get the original, the directors cut of the film even throws in some extra information about time travel, which makes things a hell of a lot easier to understand, and makes you feel a bit like a scientist. So popular was this mind-bender that it even managed to spawn a completely bollocks sequel entitled S. Darko, assumedly about Donnies cousin, as this would give the film the perfect opportunity to justify its completely unknown cast, and random relocation. I havent seen it, perhaps I shouldnt comment. Its ironic that the apocalyptic nature of Donnie Darko echoes Richard Kellys career following the films release; thus far, Kelly is yet to produce more than the average Alpha Dogs and overblown stinker The Box.
Contributor
Daniel Flynn

I am a third year English student at the University of Southampton attempting to use my interest in music and films in a mildly productive manner. I hope it has worked.

10 Actors Who Just Gave Their Worst Ever Movie Performances New

Batman Quiz: Can You Match The Scene To The Movie?

Doctor Strange In The Multiverse Of Madness Quiz: Match The Quote To The Character New