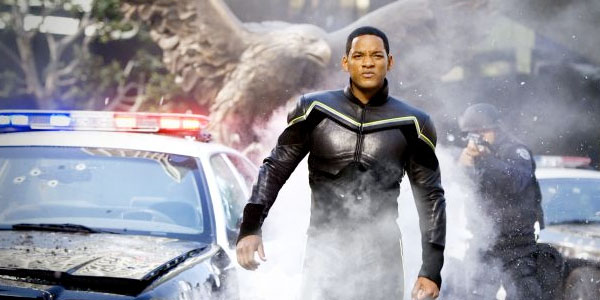 The being who would come to be known as Hancock was a member of a species of immortal superhumans who, during their time, came to be known as gods or angels. Hancock has lived for more than 3000 years and is a descendant from the ancient world, having lived and impacted several civilizations like Persia and Greece. There is no knowledge of his parents or family. His kind were created in pairs. When they were close to each other, they lost their super-powers, which meant that they could live together like ordinary humans, grow old together and later die together. Although, if the pair separate, each of them retains their superhuman abilities. While living in Miami with his superhuman (but de-powered due to her close proximity to him) wife, he tried to stop a mugging and his skull was fractured, causing amnesia. After his wife took him to a hospital, he woke up and didn't recognise her. She then decided to leave him so he could recover from his injuries and live forever, which he did, as a reluctant and lazy hero.

12 Sci-Fi Movies That Purposefully Mess With Your Head

12 Most Heart-Stopping Sci-Fi Movie Scenes Ever

10 Movie Mistakes You Can Never Unsee

15 Most Mindlessly Entertaining Action Movies Ever