Len Wiseman's remake of Total Recall hits cinemas this week, but if like most, you've found yourself dismayed at how poorly it follows the original film, you've probably found yourself thinking back to everything the original did so well. Below we list the 10 ways Len Wiseman and co. screwed up a remake that nobody wanted anyway! 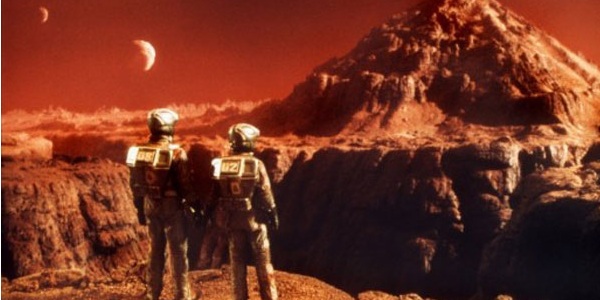 Perhaps the defining aspect of the original Total Recall was its largely being "set" on Mars, with Schwarzenegger's Quaid opting for a memory implant of a luxurious vacation on Mars, which of course goes disastrously wrong. The entire aesthetic - soaked in gorgeously saturated reds and oranges - was defined by this setting, and it made the quirky, campy weirdness of the piece all that more endearing and entertaining. In Wiseman's update, the entire narrative is set on Earth, which in the wake of chemical warfare has been divided into two remaining factions - the United Federation of Britain and the Colony (essentially Australia). While it's understandable in both scenarios that Quaid would want to escape a humdrum life as a manual labour worker, isn't it more fantastical and thought-provoking that he ventures to another planet in the original, rather than simply live in near enough the same place, but as a secret agent? Furthermore, the aesthetic in Wiseman's film is just nowhere near as unique or original; its Chinatown-inspired, rain-drenched locales feel awfully derived from the likes of Blade Runner, and various other elements of the world are shamelessly pilfered from the style of films such as Minority Report (coincidentally also adapted from a Philip K. Dick book and starring Colin Farrell), and i, Robot. Furthermore, eliding Mars makes the three-breasted mutant character we see in the remake feel hugely tacked on, shoehorned in to provide a passing reference that would resonate with fans of the original. Verhoeven's version, set on Mars, can have a lot more fun with this idea, as we get to glimpse all manner of weird and wonderful mutants. And that's precisely the problem with the 2012 take; its tone.
Contributor
Shaun Munro
Contributor
Twitter

10 Movies That Forced Actors To Face Their Fears

Harry Potter Quiz: Can You Match The Weasley Scene To The Movie?