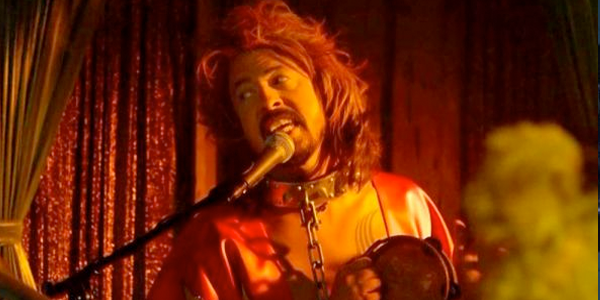 Filmgoers have many pet peeves: plot holes, bad lighting, terrible audio and porn star acting. We also hate it when rock stars try to act and actors try to be rock stars (see: Eddie Murphy, Don Johnson and Lindsay Lohan. on Johnson and Lindsay Lohan's music videos are great unintentional comedy sketches whereas Eddie Murphy's duet with Michael Jackson floating in the air is just painful). However, when rock stars can actually act, we are pleasantly surprised. Furthermore, we are surprised that they are so good that we barely recognize them in their roles until a Whatculture article or your savvy film friend points it out to you. Hence, we present 10 Rock Star movie Cameos You Never Noticed.

For the 80s music fanatics, you may know Aimee Mann as the frontwoman for the neo-wave group 'Til Tuesday. For cinephiles, she wrote and sang majority of the songs for P.T. Anderson's Magnolia. The song "Save Me" earned her an Academy Award and Grammy nomination (she lost to Phil Collins and Macy Gray respectively). However, in the Coen Brothers' brilliant comedic film noir The Big Lebowski, she is the woman/german nihilist who has nine toes. She only utters a menu order in German, which another nihilist translates as 'lingonberry pancakes.' However, Aimee Mann is not the only actor in her family as her husband has also played a part in another Paul Thomas Anderson film.
Contributor
Sharon Mayo
Contributor
Twitter

Sharon Mayo is a freelancing television engineer and contributor to pop culture websites. She has a Bachelor of Fine Arts in Film and Television from NYU's Tisch School of the Arts. She is obsessed with South Park, Sherlock (or any awesome mystery detective shows--RIP Monk), The Groundlings and corgis. Sometimes she follows politics and sometimes she doesn't. Her three favorite Brits are Colin Firth, Alan Rickman and Benedict Cumberbatch. She hates onions. If she sounds interesting to you, follow her on twitter at @holyshizayo.

Harry Potter Quiz: Which Movie Did Dumbledore Say It?