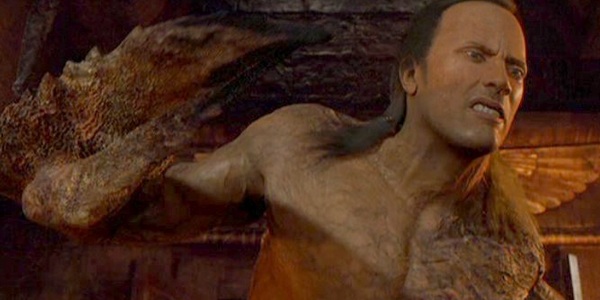 Though one can trek through the annals of film history and find countless instances of awful visual effects in everything from 1930s creature features to modern low-budget Asylum pics, our judgement of visual effects is so often tailored to our expectations that it's never as galling - or as hilarious - than when a high-budget Hollywood feature boasts absurdly low-rent CGI. Thus, the focus in this feature is on recent films from the last decade-or-so, whereby many of the classic pitfalls should have been ironed out, but going by this list, they in fact haven't been. Also, while infuriating characters like Jar Jar Binks from George Lucas' Star Wars prequel trilogy inspire more ire than the below visual effects foibles combined, that is more a failure of personality than of aesthetic craft, so he and his kind have been excluded from the list. Also, films that are intended to be kitschy and feature unfussed visual effects, like Snakes on a Plane and Journey to the Center of the Earth have been rendered exempt because we're essentially supposed to laugh at the crappiness of the CGI. The aim of the list has been to focus on expensive post-2000 projects - with one amusing exception - because ridiculing dross like this is just too easy: http://youtu.be/2_E9ebt1a_s

http://youtu.be/rjySfZziRlA While Gore Verbinski's remake of The Ring delivered some palpable thrills to English-speaking audiences too lazy to read subtitles, The Ring 2, actually directed by the original film's helmer, Hideo Nakata, was quite ironically an absolute disaster. The lack of tension marked it as a rare dull outing for the lovely Naomi Watts, and risible scenes like above just illustrate why. Combining the unbearable performance of Watts' character's son with the utterly ridiculous CGI-infused effort to try and make deer scary, we have a scene that fails in its intentions at every turn. And why? First and foremost, it's the poor quality of the effects; even when moving slowly across the shot, the deer aren't for a single second convincing as actual animals, and once they turn aggressive, any and all credibility quickly drains away. The scene is more unintentionally funny than anything, particularly because the deer smashing into the car doors looks so phony, and their violent movements inside the car are not animated with a single bit of authenticity. Similarly, as they run over another deer who runs at their car, the physics are unconvincing, though trying to make them out is itself difficult given the blurriness of the accident. Also note the near-stationary shots of a deer's eye and leg at the end - how can they not get this right? It's a depressing sign of the times when filmmakers aren't even prepared to round up a few deer for the less-challenging shots.
Contributor
Shaun Munro
Contributor
Twitter

10 Movies They Didn't Know How To End