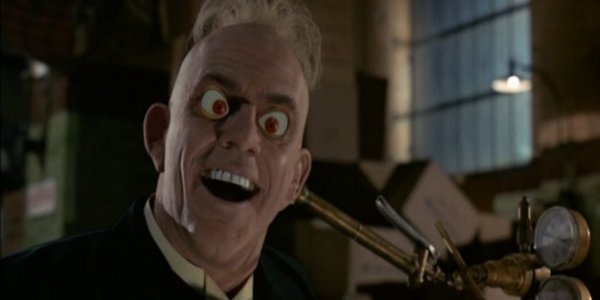 Played By: Christopher Lloyd Doom is cold and sadistic, taking extreme amounts of pleasure in punishing toons who stray from conformity. The toons are scared of him and the audience even more so as his attire resembled that of an undertaker and he walked like the grim reaper, ready to perish his prey. With the climactic big reveal during his showdown with Bob Hoskins' Eddie Valiant, we get to see the true horror of Judge Doom as his secret is exposed and so are those hideous eyes that petrified every man, woman and child when they saw them for the first time.

Played By: Robert Helpmann To children watching Chitty Chitty Bang Bang, there would be nothing more terrifying than The Child Catcher. He's every child's worst nightmare with his creepy mannerisms and horribly jarring voice that still keeps some adults up at night. A visual character, he is an array of visceral colours that make him stand out and his crooked nose is enough to give anybody a lifetime's worth of fright. If that wasn't enough, then the close parallels to paedophilia, especially the scene with the lollipops, are enough to keep you awake for months and cost your parents a large psychiatrists bill. The Child Catcher is a great villain because he is unique and is the greatest of children's fears.

Played By: Gert Frobe Goldfinger beats the villainy of Blofeld, Le Chiffre, Scaramanga and Raoul Silva as the greatest nemesis in the James Bond franchise, mainly because of his penchant for flair and showmanship. Goldfinger is the villain all James Bond fans love to hate as he is Bond's toughest enemy in arguably the best James Bond film. He is charismatic and instantly recognisable with an illustrious voice and distinctive look and it is really hard not to see him as one of cinema's coolest villains. His panache is endless, but don't let his charisma fool you and he is Bond's most dangerous adversary and also his most inventive. Nobody pushed the legendary spy as hard as Goldfinger did until his most recent outing in Skyfall.
Gaming

15 Great Sci-Fi Movies (Nobody Ever Talks About)

20 Most Rewatchable Sci-Fi Movies Of The 21st Century

25 Things You Didn't Know About Die Hard With A Vengeance

MCU: The Worst Thing EVERY Avenger Has Done

12 Movies Literally ONE Step From Perfection

10 Great Films That Are Ugly On Purpose

Harry PotterQuiz: How Much Do You Know About Tom Riddle? Community