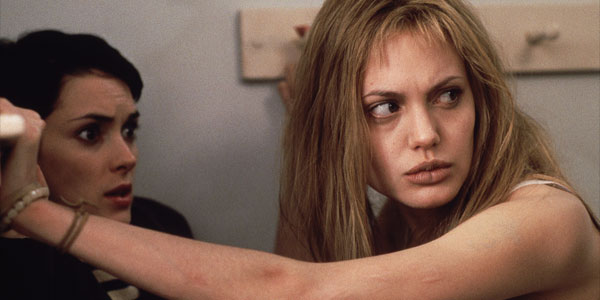 The vast majority of films featuring disturbed people are male. We know plenty of male psychos - but they tend towards the sociopathic end of mental illness. The disturbed female is rarely a true sociopath (but there are exceptions). Film makers seem to portray women with different mental illnesses. In particular, the most common type of deeply disturbed women in cinema seem to be afflicted with Borderline Personality Disorder. It pops up time and time again and produces erratic behaviour, extreme anger, self destruction, inidents of stalking and virulent homicidal rage. Bunny boilers aside, cinema has also portrayed schizophrenic and bipolar women, religious nuts, and even the odd sociopath for us to goggle at. I have compiled a list of some of the nuttiest women in cinema history for your perusal - so sit back and enjoy some seriously twisted sisters.

Ultimate mad as a hatter female flatmate who will wreck your life and steal your identity - Hedra Carlson has issues. The first signs of instability come whenever 'Hedy' tells Allie that she was a twin but her sibling was born dead leaving her with a feeling of constant loneliness. Her innate insanity begins to ruin Allie's life as Hedy reveals herself to be a disturbed, manipulative bitch. Her antics include: buying a dog and then killing it - trying to frame Allie's boyfriend Sam for the heinous deed, erasing all of Sam's phone messages to Allie before she can hear them, stealing Allie's identity - right down to her hairdo, pretending to be Allie whilst performing fellatio on Sam and then killing him with a stiletto when he threatens to tell Allie. Finally Allie manages to knife Hedy to death following an extended fight at the film's conclusion. Hedy is obviously a sufferer of Borderline Personality Disorder in its most extreme manifestation. She lacks a core identity and therefore tries to assume Allie's appearance and take over her life. Hedy is terrified of rejection and abandonment hence she plants firm roots to stop Allie from getting away from her. Jennifer Jason Leigh gives a superb performance as Hedy and makes her an all too believable psycho. After watching this, you will seriously screen the background of any potential roommates.
Contributor
Clare Simpson
Contributor
Twitter