New Line CinemaThe death of an important movie character should be a pivotal moment in any great movie, turning the entire dramatic and emotional tide depending on whether it's a hero or villain who meets their untimely demise. How a character bites the bullet will form part of their cinematic legacy forever more, but what about their last words, presuming they're given the chance to actually have some? A soon-to-be-dead character's last words are typically used to reinforce a relationship, cement a character's intentions, provide some emotional catharsis to other characters or the viewer, but above all else, give us something to remember the character by. Almost all films try to give dying characters famous departing words, though creating an iconic moment out of it is an art that can't really be taught: it relies on a harmonious dance of direction, screenwriting and acting to create final dialogue that's either devastatingly sad, totally bada**, or on rarer occasions, even gut-bustingly hilarious. These 15 classic send-offs all left audiences in some form of heightened emotion, reeling from words that said more about their respective characters than all of their previous screen time together. If you're going out, you might as well make it memorable, and these iconic characters, in some cases rendered iconic precisely because of their final words, went out in pure style. Did we miss any of your favourite dying words in movies? Let us know in the comments! 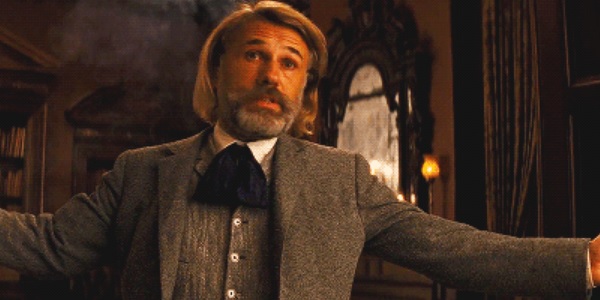 The Weinstein CompanyThe Line: "I'm sorry, I couldn't resist." How He Dies: When King Schultz (Christoph Waltz) and Django (Jamie Foxx) are finalising their deal with plantation owner Calvin Candie (Leonardo DiCaprio), Candie staunchly insists on sealing the partnership with a handshake. This is simply too much of an affront to Schultz, however, who walks up to Candie, removes a concealed pistol and shoots Candie square in the chest. As Candie expires and everyone reacts, Schultz calmly quips his final line and is promptly blown away by one of Candie's henchmen with a shotgun, catapulting him into the bookcase in the background. It's a quintessentially snappy, witty line of QT dialogue, but what makes it classic? It sounds like something you'd say for causing someone a relatively minor inconvenience, like throwing a penny in their pint of beer, not for murdering their boss. The whole set-up is made even more bada** considering that Schultz clearly knows he's going to die and just accepts it.
Contributor
Jack Pooley
Contributor
Twitter

10 Movies That Are Totally Different By The End

10 Movie Details That Aren’t As Important As You Think

Spider-Man: The Progressively Harder Match The Scene To The Movie Quiz

10 Best Movies Where We Meet The Villain First

10 Movies That Saved Their Respective Franchises

10 Greatest MCU Villains With No Powers