Universal PicturesWhat wasn't there to love about growing up in the 1980s? It might have been the era in which "greed is good" became something of a mantra, but as kids we couldn't have cared less about the politics of the times - if indeed we even care about them today as adults. Reflecting on our childhood in the 80s and talking about it today to younger people and we can't help but sounding like a variation of our grandparents. "In our day we didn't have any internet or mobile phones, and we had to ask our mum for permission to use the landline telephone to give ring our mates and see if they wanted to come out to play. And if you wanted to listen to an album again from the start, you have to wait until the tape had rewound! And don't get me started on video games - back in our day we were lucky if a console could display 256 colours on screen at once!" Still, if there's one thing we certainly did have that we can be proud of it's damn entertaining movies, of which we were completely spoiled for choice. It's a statement that might sound like bias through nostalgia-tinted glasses, but the evidence surely speaks for itself. Here are 20 of the greatest movies of the decade which defined our childhood - awesome 80s movies which we'll cherish forever. 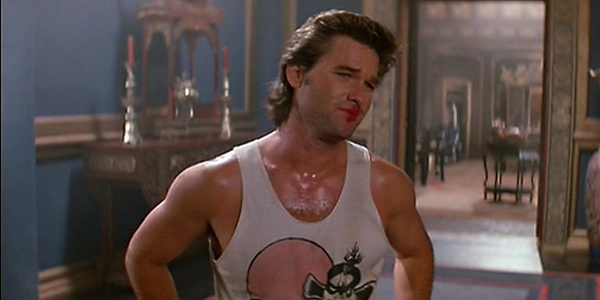 20th Century FoxThe realisation that John Carpenter's Big Trouble in Little China was a commercial failure only tends to reinforce the idea that sometimes audiences don't appreciate a good thing when they see it. Following the exploits of truck driver Jack Burton (Kurt Russell) as he finds himself caught up in a battle against an evil sorcerer, it is one of the most inventively entertaining martial arts-based action movies to have emerged from Hollywood. Russell's pitch-perfect send-up of the typical action hero is just one of the highlights of Big Trouble in LIttle China, portraying a hero as hapless and inept as he is pig-headed and determined. But the action and special effects take centre stage - from the moment the warriors arrive in the alleyway, surrounding Jack Burton's truck, we knew we were in for something special - and when "The Three Storms" appear that's exactly what we got. More than a few children of the 80s found themselves covered in cuts and bruises after trying to mimic the aerial combat moves, and John Carpenter never came close to making a film quite so entertaining again.
Contributor
Andrew Dilks
Contributor
Twitter

10 Movie Moments Everyone Was Waiting For (That Never Happened)