Children! Young innocent souls ideally freed from corruption. Not the kids on this list - they are to varying degrees, afflicted with an unwholesome creepiness that may put you off parenting for life unless you want to delve into the world of extreme parenting. I found while I was writing this article, that there are different types of creepy movie kids. I won't spoil the article by naming the characters, but I will give the topic a brief discussion. There are creepy kids who are inherently lovable but have supernatural inflictions that makes it suck to be around them. There are creepy kids who are inherently evil - budding psychopaths capable of terrible atrocities and who hide behind a polite, civilised facade. And there are the outright scary movie creepy kids who act as a masked knife man would in a slasher film. There are also kids who are just plain misunderstood. I hope that in this article I have offered you - the reader, a large selection of freaky little kids to browse through and subsequently review the safety of your contraception regime in the light of such naughty nippers. 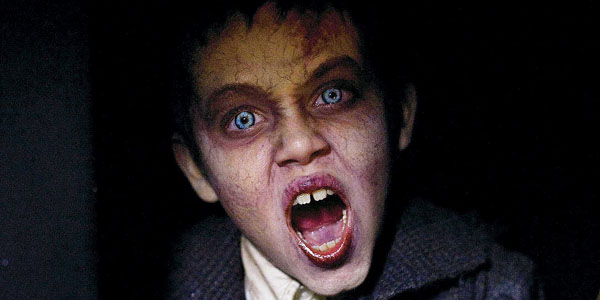 Casey Beldon is haunted by hallucinations Of weird dogs and a creepy looking kid. Whilst babysitting the neighbour's son she hears a voice say 'Jumby wants to be born now'. The brat is holding up a mirror to his infant sister's image. Casey learns she had a twin brother that died in the womb. His soul has been possessed by a dybbuk - a demon that wants to be born in the real world. It also turns out that Casey's grandmother was an inmate in Auschwitz and her twin died from being experimented upon. He was brought back to life by a dybbuk and her grandmother had to kill him. The dybbuk now haunts the family and Casey requires the presence of an exorcism-performing Rabbi to get rid of the little blighter. The Unborn is a pathetic, dumb horror movie that lifts large amounts of its content from better horror films and relies on horror movie cliches to make an impact. The acting is woeful, the direction is plodding, the script is weak. You would have to be a complete horror novice to be scared by the film. It is symptomatic of the rot that has set into mainstream Hollywood horror films. The demonic children are the best things about the movie. They don't really provide any massive shocks as they act in a typical freaky kid horror manner, but you would not want a creepy dybbuk as a part of your life
Contributor
Clare Simpson
Contributor
Twitter

10 Movies You Were Totally Wrong About New