A lot of movies these days have one thing in common: they suck. As passionate film fans, though, no matter how bad a movie looks, we tend to give it the benefit of the doubt until come release day - the time upon which something that has spent years in development and production goes out into the world and is exposed to the opinions of millions of people. When it goes right, it usually goes really right. When it goes wrong, however... well, you don't really want to be there when that happens. The problem with sucky movies nowadays seems to stem from the fact that explosions and a sense of the "broad" tends to take the focus away from telling properly realised and intricate stories, which means that most movies - Hollywood movies, anyway - tend to leave your memory banks minutes after you've seen them. It's true that a really bad movie can linger with you long after you've seen it, but that's rarely what the associated filmmakers wanted to happen. They wanted to impress you. Is cinema, on the whole, getting worse? Is it possible to tell a bad movie from a mile off, going on just the production stills, trailers, and attached writers and directors? Possibly so. Here, then, are 20 Upcoming Movies - movies which we can't help but feel are going to really, really suck... 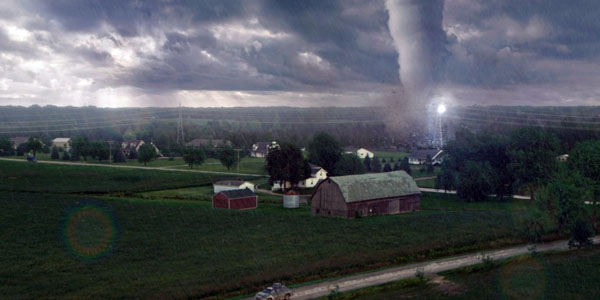 Warner Bros. PicturesWhy It's Going To Suck: Potentially Lacking Story/Unoriginal Plot Into the Storm is a movie that has clearly been designed to bring people into theatres on the basis of "watching monumental scenes of destruction" with little to no context. The trailer literally depicts things being destroyed by a great, CGI-rendered storm, and that's about it. The plot hinges on - according to Wikipedia, anyway - "students documenting the events and aftermath of a devastating tornado," which doesn't sound all that interesting, either. The fact that this thing is also being helmed by a notoriously bad director - one Steve Quale - and features a fairly understated cast also brings up a few warning signals, like: "This movie might not have a lot to say for itself." There's also the matter of some particularly awful and low-budget looking CGI sequences (glimpsed in the trailer), and also the fact that it's pretty much The Day After Tomorrow 2.0, but with a lot more wind. No thanks.
Contributor
Sam Hill