24. The Man With The Golden Arm 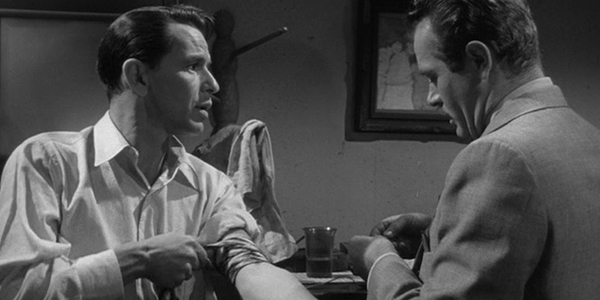 United ArtistsThe Drug: Heroin Otto Preminger's adaptation of Nelson Algren's novel The Man With the Golden Arm was perhaps the first truly controversial - and by the same token authentic - film to explore the perils of heroin addiction. While it may seem incredibly dated (and sedated) by today's standards, it broke new ground at the time, revealing to audiences the harsh reality of withdrawal from opiates. Before its release, heroin-related movies were simplistic "dope fiend" exploitation movies which bore a greater resemblance to the shock tactics "public health warning" movies along the lines of Reefer Madness. With Frank Sinatra in the role of Frankie Machine, the subject finally had the pedigree it deserved, and The Man With the Golden Arm delivered a shot of realism and portrayed his descent into despair with great dramatic effect. While it has been surpassed many times since (not least as regulations about the depiction of drugs in movies have become increasingly lax) as a piece of cinema history it represents a watershed moment.

12 Movies You Can Stop Watching After The Opening Scene