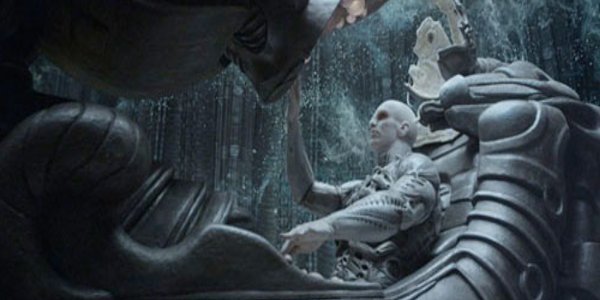 If you're making a prequel to something, there's nothing wrong with answering questions from the original, and calling back to that film a couple of times throughout. Prometheus does both of these things, but poorly. When you are trying to resolve mysteries from a previous film, you sure as hell better have a satisfying resolution when people have been wondering for over thirty years what the answer might be. So, in Alien, there was a massive turret-like thing in which a skeleton was lying, with a hole in its chest, making it evident it was the victim of a chest-burster (how the aliens in that film reproduce). It's something which has been fascinating to fans for years, and in Prometheus, the answer is finally revealed. It's a driver's seat. That's basically it. It's something an alien straps into to drive a spaceship. Not only does this let us down, but it also kind of ruins the original film. When you think of the mystery and the fascination that the 'space-jockey' (as it was called) produced, it undermines the intrigue that original film gave us. The main example of pandering the film exhibits, though, is a moment where all the scientists are searching through caves to find a shrine dedicated to the Xenomorphs (the aliens from the original series of films). Not only is this cheap and heavy-handed, but a post-credits scene shows a early evolutionary version of the Xenomorph come out of a giant tentacle monster that comes about through a narrative leap that won't even bother trying to explain and seven foot tall, muscle bound, bright white aliens nicknamed 'Engineers'. Two things, if there was a shrine to the Xenomorphs, why was there an early version of the Xenomorph at the end? They were praising something that literally didn't exist yet. Second, I hope you're happy, Prometheus. You made our favourite monster in a product of a giant tentacle monster screwing an albino swimsuit model. Nice job.
Contributor
James Haves
Contributor
Twitter

Born in London, England, James is a media sponge. He consumes media of all shapes and sizes, from movies, to games, to music. He'll take it all. Apart from spending most of his life surrounded by media (his parents are musicians and his brother is a writer), he has been writing film reviews professionally for almost two years, and spends most of his time watching films, playing video games, and generally being an extremely anti-social person. Luckily, that leaves him a lot of time to write articles, such as the ones you will see on this page. Enjoy!

10 Major Movie Reveals That Should've Come At The Beginning

10 Movies That Didn't Understand What The Fans Wanted

10 Actors Whose Career Has BOMBED After Their Biggest Hit

10 Most Insulting Movie Sequels Ever

8 Best Number 8 Films In A Franchise

10 Scariest Movies Made By Disney

Flashpoint: 10 Major New Details You Need To Know About The Flash Movie