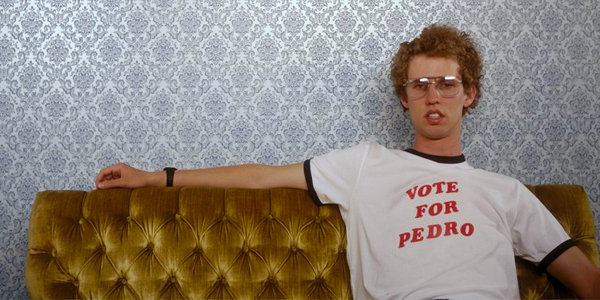 Countless people walk around with Heisenberg sketches or Weyland-Yutani logos on their chests, but if you really want to show your love for a film the best thing to do is get an actual replica of your characters clothes. Normally innocuous enough to pass for a regular t-shirt (unless you're going deep into the realms of cosplay), they're the sort of thing you can wear with pride, particularly whenever another fan spots it. There's plenty of awesome t-shirts in movies to choose from; some are flat-out funny, others are in-jokes in themselves or they may just be the ones that are made awesome by plain association. Whatever the case, there's a disproportionate number of characters in film with awesome wardrobes. Today we're going to dive into the world of awesome movie tees and bring you sixty of the best.

The Movie: The Avengers Worn By: Tony Stark Essential in giving Iron Man that cool in the first place, it's nice to see Marvel throw out some reverence to the band.

The Movie: American Flyers Worn By: Various Once you got it up, keep it up. Right? Although in Latin the quote's actually a lot less filthy.

The Movie: The Outsiders Worn By: Two-Bit Matthews The only way to be a convincing greaser is confess your love for all things Disney.
Contributor
WhatCulture
Contributor
Twitter

8 Most Disappointing Movie Sequels & Remakes Of 2021