Over twenty years on, it remains a benchmark for not only blockbusters and action films, but for film sequels. It is the quintessential example of a follow-up outdoing the original product, and it remains James Cameron's crowning achievement. There is no film I have watched as much as Terminator 2: Judgement Day, and here I seek to prove why it is, indeed, the greatest film of all time.

1. Proves That Sequels Can Better Than The Original 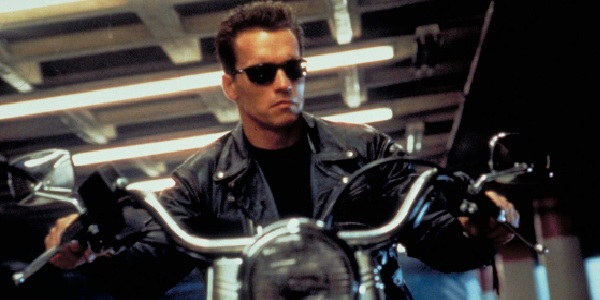 While Terminator 2 was not the first instance of a film improving upon the original, it is probably the most convincing case to date. Other instances tend to be more ambiguous; take Cameron's own Aliens, for while many will tout it as outdoing Ridley Scott's sci-fi masterpiece, many will defer to the minimalist atmospheric thrill of Scott's film over Cameron's superlative action sequences. Here there is little ambiguity; T2 is a more muscular, robust, refined machine that hews away from the horror film aesthetic of the original and transforms it into something bigger, badder, and much more thrilling (not to detract from the original film's excellence too much)

T2's enduring legacy as one of the greatest action films of all time is made possible by the man steering the ship - James Cameron himself. Showing seat-of-your-pants promise with his low-budget The Terminator, before graduating onto the high-tech military fetishism of Aliens, Cameron's teeth were fully cut by the time he arrived on the set of T2, delivering what remains one of the best-directed and most technically sophisticated blockbusters ever made. It is a high point that he has not yet met - even with the huge successes of his Titanic and Avatar - but you know, I'm OK with that.

http://www.youtube.com/watch?v=J4PcWepywNM&feature=player_embedded With the onset of the Internet, imaginative viral marketing campaigns are de rigeur these days, but twenty years ago, film marketing had to be much more canny, and that's why the teaser trailer for Terminator 2 remains one of the most brilliant and memorably iconic. The teaser is mysterious, showing us a number of endoskeletons being constructed in a dark, foggy warehouse. A jazzy version of the original film's theme plays, perhaps hinting what this new attraction might be. The machine comes to life and we see its hand; we know where this is going. But it still lacks that identifying human countenance we're used to, so the machine is then pressed into a contraption with a larger, more human-looking groove. The machine re-opens, revealing to us an unbelievably muscular figure shrouded in darkness, whose face is illuminated to reveal, yes, Arnold Schwarzenegger. He opens his eyes, which are red, and we cut to the T2 logo. Arnie's utterance of the iconic "I'll be back" is re-played, as viewers are left to wonder how the Hell Arnie could possibly be back after he was crushed in a mechanical press by Linda Hamilton at the end of the first film. Given the high production value of the teaser, it also likely cost a lot more than most independent features do nowadays.
Contributor
Shaun Munro
Contributor
Twitter