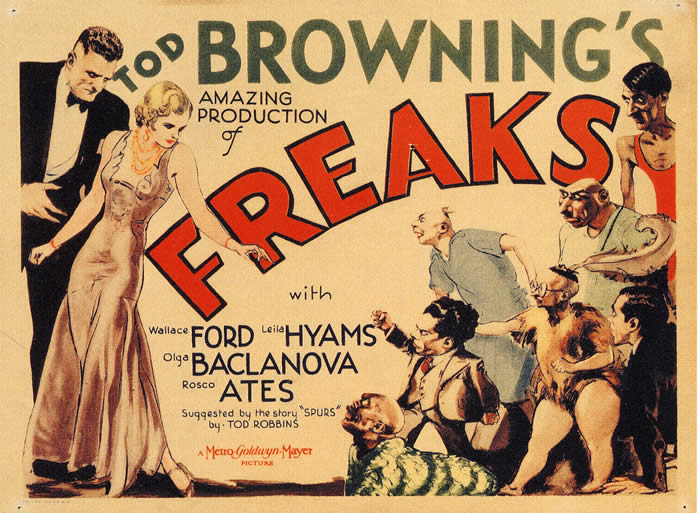 Director Tod Browning grew up in the circus  under the big top  amidst manic clowns, hairy women and human deformity all lined up for our entertainment. These were his people. Roll up, roll up. Roll up, roll!! Dare you see Freaks: the controversial classic, banned in the UK for 30 years!! Gather round and gasp at these misshapen misfits. Dance with the Pinheads; lust after sexy Siamese Sisters; be confused by Joseph/Josephine the half man, half woman; and cower at the murderous Code of the Freaks!!!!

It was made in 1932 and has gathered a reputation as a perverse masterpiece. People cower at its name, tut at its exploitation of the physically disabled (it was cast with real sideshow performers) and thank the Lord that we now live in enlightened times. But for the most part Freaks is sympathetic to its title characters. Seldom do we witness them perform for the gawping audience; instead we focus on their workaday lives back stage  their ordinariness  as they rehearse tricks and share a drink. The tent pole of the narrative hangs on this everydayness and plays out like a soap opera viewed from within a Hall of Mirrors. We see them fall in and out of love, get married, fight and make up. The Siamese Twins (Daisy & Violet Hilton) struggle to balance relationships with family and lovers; the Pinheads (Zip & Pip) are afraid of the outside world and a dwarf (EARLES) becomes besotted with a woman who barely recognises his existence. They may be a twisted reflection of us, but they are a reflection none the less. While these outsiders display an inward normality, Browning presents a world were the so called beautiful people are the real freaks. Cleopatra (Baclanova) feigns love for the dwarf Hans to get his inheritance and begins to systematically poison him. Her cruelty is often painful to watch and leads the film into some truly dark areas.

At their wedding banquette Cleopatra reacts in horror when the sideshow performers attempt to accept her as, one of us.

She then degrades Hans further by lifting him up like a baby and passing him off to her Strongman lover (VICTOR) who throws the man on his back and gives him a horsy-ride. They take away everything hes got. But this scene only serves to remind us that Freaks is a horror picture. Browning had made his name directing silent pictures with the legendary (including the similar The Unknown in 1927) and MGM were keen to capitalise on the massive success of Universals Dracula (also directed by Browning) the previous year. They figured that Lon Chaney's sideshows to be the perfect breeding ground for the macabre. So while the bulk of the picture observes ordinariness, the final act plunges into a kind of stereotypical nightmare. Rain lashes down hard, black shadows haunt the trail of carnival wagons and the freaks, having discovered Cleopatra and Hercules plan, decide to exact revenge. They plan to slash her up good  truly make her, one of us. Its a beautifully staged sequence, but reinforces the otherness of these performers that the rest of the film had sought to undermine. A shame. Yet the film is still worthwhile. Today we prefer our freaks to be more like Cleopatra (ugly on the inside) and gather round our TVs to gasp at human oddities on display in countless reality TV shows. Makes us feel good. But Freaks is a movie for outsiders, and who knows, maybe fans of Big Brother could learn a thing or two. Gooble-gobble, Gooble-gobble.

WhatCulture's 31 Days of Horror 2, a month dedicated to the horror genre in the run-up to Halloween has begun. Check out our articles so far here; WIN: WAR GAMES On DVD, We Have 3 Copies To Give AwayMr Fears Games You Cant Play Alone #1: PROJECT ZERO II: CRIMSON BUTTERFLYSHARK NIGHT 3D Review: A Toothless Mess Of A Film12 Most Over-Used Horror Clichés
Want to write about Movie News, After Dark, 31 Days of Horror, Lon Chaney and Freaks? Get started below...
Contributor
Tom Fallows

Tom Fallows hasn't written a bio just yet, but if they had... it would appear here.

10 Movie Secrets Everyone Knows Except You New