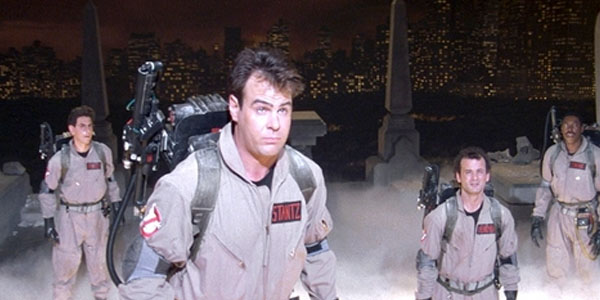 It was the early 1980's. A new pop culture phenomenon had swept the western world and I was dancing around singing "Who you gonna call?" at the top of my lungs as I waved around an imaginary Proton Particle Thrower and set off a pretend Containment Unit. Ghostbusters had been released and the supernatural had become lounge room conversation. Jump forward to 2011 and a much older version of myself settled into a cozy cinema seat, still humming the theme music, and waited for the re-release of one of my favourite childhood flicks to begin. I was unsettled and a little fearful. It had been a few years since my last viewing; perhaps the film had aged badly in this new millenia. Or worse, the studio may have decided to take a nod from George Lucas' approach and revamped all of the special effects with modern digital wizardry. The lights dimmed and the projector flickered to life. And I was 6 years old again.

Ghostbusters is a cult movie for more reasons than I have time to list here, but the most important is the way that it embraces the imagination and takes you on a hilarious thrill ride into what is usually the realm of horror films. The jokes may be coming up on 30 years old (this post is making me feel old) but they haven't aged a day and I now find myself dropping classic lines in day-to-day conversation: "When someone asks you if you're a god, you say yes!", "Human sacrifice, dogs and cats living together... mass hysteria!" or "Listen... Do you smell something?" Brilliant. They don't make films like Ghostbusters anymore. We've gotten to a point where even comedy seems too serious and being ridiculous just for the sake of being ridiculous is frowned upon. What happened to the seemingly innocent films that managed to gather in audiences of all ages, walking a fine line between family and adult? When franchising grew out of great ideas instead of the other way around?

The best thing about the re-release is that they haven't changed a thing. The image is 2K digital and the sound has been revamped to 5.1 surround sound, but that's it. No new CGI improvements. No cleaning up the hazy edges and obvious optical inserts. No pointless 'enhancements' that just distract from the story. You can see the effects just as they were created back in 1984, a time in which they were cutting-edge and the very best of special effects the world had seen. Now the big question. Does the film feel dated? Yes, but only in a good way. Watching Ghostbusters again is like cuddling up in a big warm blanket; it gives you everything you expect and part of that is the era in which it was made. Sure Sigourney Weaver's hair is way too big, and Rick Moranis takes stereotype to a new level, but this is what it was. And it works.

I am not going to bother reviewing the film itself. That was done decades ago. I doubt that anyone who is reading this has not seen it before so my review is based purely on the quality of the re-release. It is the same film you love. In glorious, sometimes clunky, detail. And for me it was the first time I have seen it on the big cinema screen; a treat worth waiting for. A wall-mounted TV or Blu-Ray player will never equal the sheer feeling of the experience of seeing your favourite films the way that they were originally intended. With all of the backwards and forwards in the development of the possible Ghostbusters 3 film it's nice to be reminded what all of the fuss was about in the first place. The Ghostbusters are back!

Ghostbusters re-release opens in UK cinemas on 28th October 2011. Make sure you check out our 50 Reasons Why Ghostbusters Is The Greatest Film Of All Time article!
Want to write about Bill-Murray, Sigourney-Weaver, Harold-Ramis, ghostbusters, Dan Ackroyd, Ernie Hudson, Rick Moranis and Reviews? Get started below...
Contributor
David Hawkins

A director & cinematographer by trade, but a Geek by choice. David grew up on the beaches of Sydney, Australia where he spent most sunny days indoors organsing his ever-expanding comic collection. Snubbed by the world at large, he wrapped himself in the sweet, sweet tales of the Marvel Universe and only resurfaces for Cheezels.

Star Wars: 10 Awesome Ideas Disney Must Include In Episode X