John Carpenter is considered one of the most iconic horror directors, having created such classic chillers as Halloween, The Thing and The Fog. Carpenter has also given us some damn good action movies too, introducing us to Snake Plissken in Escape From New York and even blessing video game icon Duke Nukem with one of his most famous lines ("I'm here to chew bubblegum and kick ass.... And i'm all outta gum") which was nabbed from alien invasion movie They Live. Sadly, Carpenter's work has become somewhat overshadowed by a later career of disappointing films - many of which have failed to excite both critics and audiences. As we enter the final stretch of this years 31 Days Of Horror celebration, we take a look at the 5 best and the 5 worst films made by the infamous master of horror.

I once managed to see an open-air screening of The Thing at London's Summerset House on a particularly spooky evening. It proved to be the perfect way to watch John Carpenter's horror classic. Huddled under blankets as the night got colder and the suspense mounted, it was about as close as you'd want to get to the film's arctic chills without contracting frostbite. As Ennio Morricone's synth heavy score boomed around the courtyard, everyone watching became completely drawn into the film - it was perfect. Thankfully you don't need to watch The Thing outside in the freezing cold for it to be effective.... It's one of the most atmospheric horror films ever made. It's a masterclass in building tension and a feeling of paranoia, that hasn't lost any of its ability to shock and sicken with its gruesome and icky practical effects. Awesomeness of Carpenter Score: It might be the work of the amazing Ennio Morricone, but the synth heavy main theme is still distinctly Carpenter. Halloween (1978)

Halloween is so effective, it manages to make someone hiding in bushes while wearing a William Shatner mask terrifying rather than amusing. It also remains an important lesson in how to make a horror film which leaves most of its kills to the imagination, without actually showing any explicit gore. But for me, more so than anything else, Halloween is scary for it's use of all the best John Carpenter hallmarks. The terrifying synth score, the wide Panavision shots in which it always seems like something is lurking out of frame, and the way in which the film slowly builds its tension before reaching an unbearable crecendo of terror in its final 15 minutes. Awesomeness Of Carpenter Score: Even if the film wasn't scary (it is) the score itself is one of the best in the history of horror. Simple, but oh so effective. Assault On Precinct 13 (1976)

Despite being one of Carpenters earliest films, Assault on Precinct 13 is still a relentlessly taut and suspenseful thriller with an edge of sinister menace. Despite being known for his work in the horror genre, Carpenter has often expressed his true love for the western  a genre to which Assault On Precinct 13 owes a lot to. In particular the films of Howard Hawks  such as Rio Bravo and of course The Thing  would inspire Assault On Precinct 13 immeasurably. Set within the confides of a police station, which is under a vicious attack by a gang of professional criminals, the films manages to keep a high level of suspense and tension despite focusing most of its run-time into one sustained siege sequence. The brilliantly menacing score also gives the film a gritty edge, and the fact that Carpenter had the balls to depict his villains killing a young child is still shocking to this day. Awesomeness Of Carpenter Score: A simply brilliant score which is sinister and unnerving, as well has having been cited as an influence on electro and hip-hop music. It's even been transformed into several disco and rave remixes.The Fog (1980) 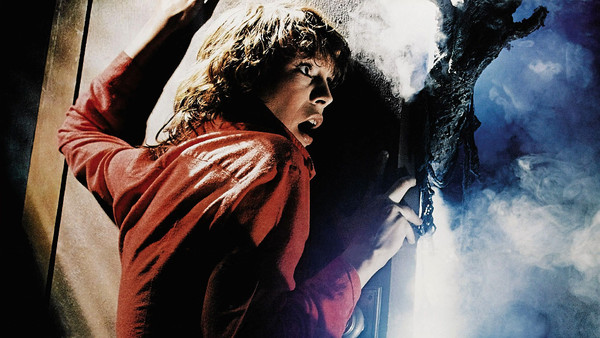 The Fog might not quite live up to the same standard of scares from the previous two Carpenter classics, but its an effective  shiver me timbers  horror. Its also notable for featuring scream queens, Janet Leigh and daughter Jamie Lee Curtis. That only happened twice and the second time was Halloween H20, so lets face it, The Fog is a little more notable. Set within a small fishing village on the coast of California, a series of bizarre occurrences become an early warning for the sweeping fog which soon engulfs the whole village. A horror film about a nasty patch of smog wouldnt exactly be terrifying, but it just so turns out that the fog contains the ghosts of a very angry bunch of pirates Blimey. Much like Halloween this is a horror film built on atmosphere and tension as apposed to explicit gore and its all the more effective for it. Awesomeness Of Carpenter Score: It's not quite as cool as other Carpenter scores, but it's a wonderfully gothic piece of music which fits the movie to a tee. Escape From New York (1981)

Featuring a kick-ass performance by Kurt Russell as the preposterously named - and Metal Gear Solid influencing - Snake Plissken, Escape From New York is an excellent apocalyptic 80s classic which sits neatly alongside films like The Warriors. The idea of the whole of Manhattan being turned into a sprawling prison, in which anything goes, is both alarmingly dystopian and funny. Its up there with Assault On Precinct 13 as one of the better non-horror efforts from the director, which again shows his passion for the Western genre. Awesomeness Of Carpenter Score: A slower, more ominous score for this one - but it's a great companion to the similar score for Assault On Precinct 13. Honourable mentions - They Live, Big Trouble in Little China, Starman

Village Of The Dammed(1995) After his chilling and arguably superior of The Thing, it seemed like Carpenter was one of the few directors who had achieved the difficult act of producing a decent remake. Sadly, by taking on a god-awful remake of 1960s Village Of The Dammed he showed us that its not always possible to do a good job even if youre John fuckin Carpenter. Christopher Reeve  in what was to be his last role before his paralyzing accident - and Kirsty Alley lead the cast through what is essentially a TV movie of the week, as a small town is plagued by telepathic children with distinctively while hair. Theres some fun to be had with the remake in a campy way, especially thanks to Mark Hamills performance  but this is best avoided. Awesomeness Of Carpenter Score:Carpenter collaborated with Dave Davies for this one, and while it's a little cheesier than previous sountracks it's the best thing about the movie. Escape From L.A (1996)

Its not great to be infamous for having the worst surfing sequence in cinema history. Especially not when youre competing with a confused Pierce Brosnan  awash in a CG sea in Die Another Day. But, sadly, thats pretty much the surviving legacy of Escape From L.A - Carpenters campy ill advised sequel to his 1981 classic. While New York was pretty funny in places, it was still a legitimately serious piece of apocalyptic sci-fi with a genuinely hard edge. Snake might have been a combination of Clint Eastwood and Chuck Norris, but he was still cool  and Kurt Russells scowling performance made him believable. In L.A, everything  Snake included  is pretty much reduced to parody, in an attempt to outdo the original with more outrageous comedy and set-pieces. Even Bruce Campbell turns up in one of the films better sequences, as a hideous plastic surgeon who is obsessed with cosmetic surgery. Think of the villain from nightmarish childrens show Lazy Town and youll get the picture. Awesomeness Of Carpenter Score: Much like the film itself, the score took the themes from the first film and overcooked them. The simple synth score of New York becomes infused with electric guitars and other rock instruments, but it's a fun score. Ghosts Of Mars (2001)Ghosts of Mars is pretty depressing stuff. Not only is it dull, unexciting and poorly acted, but its hard to believe that Carpenter is the guy behind the camera. Hes shown himself to be just as competent with action as horror, with films like Escape From New York and the great They Live, but this isnt up to that standard. Even the cast is pretty shocking - Jason Statham, Ice Cube and Natasha Henstridge. If that line up doesnt excite you, neither will the plot, which is essentially a remake of Assault On Precinct 13 with the added luxury of Mars  so everythings a bit red. Awesomeness Of Carpenter Score: As bad as the movie is, the soundtrack still has some of the magic of Carpenter's earlier scores - not bad at all. Memoirs Of An Invisible Man (1992)

A throwaway comedy starring Chevy Chase and Daryl Hannah, Memoirs Of An Invisible Man has few of Carpenter's trademarks, and is a far more traditional Hollywood comedy. In 2003 interview book titled The Prince of Darkness by Giles Boulenger, Carpenter himself denounced the film as a project to which he did not feel particularly involved with. He even states that ""Warner Bros. is in the business of making audience-friendly, non-challenging movies". But while it's a disappointing Carpenter movie, Memoirs Of An Invisible man does at least feature a few laughs and some excellent - even pioneering - special effects. It's fluffy, lightweight fun, and unlike Paul Verhoeven's Hollow Man, Chevy Chase doesn't use his invisibility to go on a rape spree. Awesomeness Of Carpenter Soundtrack: Not only does the movie feel nothing like a Carpenter production, but the score by Shirley Walker is also a sad departure. The Ward (2010)The Ward isn't terrible; in fact it's a fairly enjoyable little horror - despite its lack of offering anything we've not already seen in countless films before. Thanks to Carpenter's taut direction, it manages to effectively build suspense and even throw a few surprising jump scares. There's also some truly shocking moments of extreme ocular violence that would make even Lucio Fulci reach for the sick bag. Sadly, it unravels in its final act with a confused ending which seems like a last minute attempt to make the whole thing have more depth, rather than simply aspiring to be little more than a jumpy haunted asylum picture. A decent enough effort, but its not the triumphant return to horror that many of us were hoping for. Awesomeness Of Carpenter Score: It's not carpenter, but rather Mark Kilian. His score is an obvious homage to that of earlier Carpenter soundtracks. It's actually not a bad effort. Disonourable Mentions: Vampires, Prince of Darkness, In The Mouth of Madness ___________ Which of Carpenter's films would you pick as your best and worst ? Do you have a favourite Carpenter score ?
We need more writers about John-Carpenter, Escape-from-New-York, Halloween, Ghosts-of-Mars, The Thing, The Ward, 31 Days of Horror, Lucio Fulci, The Fog, Assault On Precinct 13, Village Of The Damned, Escape From L.A and Memoirs Of An Invisible Man! Get started below...
Contributor
Stephen Leigh
Contributor
Twitter

Cult horror enthusiast and obsessive videogame fanatic. Stephen considers Jaws to be the single greatest film of all-time and is still pining over the demise of Sega's Dreamcast. As well regularly writing articles for WhatCulture, Stephen also contributes reviews and features to Ginx TV.