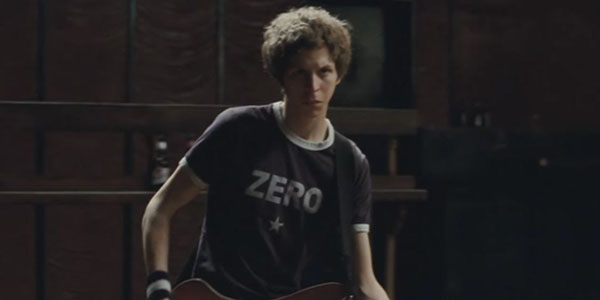 Since his breakthrough on the popular American sitcom Arrested Development, it is apparent that Michael Cera has transformed into a distinct comic persona. Michael Cera's most recent appearance was in this years typical apocalyptic horror comedy, This is the End starringas himself, featured alongside the ensemble cast that included James Franco, Seth Rogen and Jonah Hill amid other celebrities. Cinema audiences and fans alike were both treated to his horrific yet entertaining demise much to our own delight. While Seth Rogen and the others played a role of a variation of themselves, only Michael Cera gave us a complete reversal of his nice-guy persona. Audiences are aware of Ceras familiar portrayal over the years by playing predictably awkward teenagers either by fulfilling the role of the boyfriend or exemplary geek, most notably in the films which Ill cover in this article. Regardless of him embracing the commonality of these roles, he succeeds in delighting and amusing fans, much to his own credit. The effect of this allows audiences to view an enthralling character that is relentlessly absorbing, appealing and enjoyable to watch. In more recent years, Cera has began to break away from those typical roles and stepped up into the role of more courageous and gratifying characters, gaining him more recognition and appraisal from world-wide audiences. This list will look at five of his finest roles in his career so far. Spoilers ahead.
Contributor
Tom Fitzpatrick

9 Actors Who Made Better Versions Of Previous Films

10 Movies That Cruelly Teased What We REALLY Wanted To See