I was a sceptic; I thought it could not be done. I did not believe that London could host such an important global event, let alone pull it off with such grandiose confidence. But now the Olympics are over and to be honest, I dont want it to end. Particularly considering my last images may be that of Jessie J ruining Queen, or Liam Gallagher proving he needs Noel. But with Britain standing 3rd in the medal rankings, we can be proud of our athletes efforts. Whether it was handball, hockey or dressage, my eyes were opened to the magic of the Olympics and Im sad to see them go. So why not cling on for a little bit longer and join me as I attempt to blur the realms of Film and the Summer Olympics.

If you haven't read my previous parts, then please find them here: Part 1, Part 2 & Part 3

Unlike other national cinemas, Norways golden age came quite early into its history. In the 1930s, many Norwegian films were adapted from popular literary texts. Having a well-read ready made audience meant that the cinema became a popular arena. Yet again however, Nazi occupation took the axe to cinema (Damn Nazis), strangely though, censorship did not halt filmgoers, who still helped to maintain the industry by going to the cinema in their droves. So, Unlike other cinemas, Norwegian cinema maintained its production during the war and after it got its reward. During the war, the national film directorate was created, by the wars end it had amassed over 1m Euros worth of funding. This led to a post war period of filmmaking, which continued to draw in good box office figures, particularly with the productive work of female director Edith Carlmar. It was not until the 1960s that a change was seen, with cinema becoming less about displaying art and instead about politicising its narrative to comment upon social and political issues. This was a natural turning in the overall landscape of cinema, yet audiences were turned off and after a diet of mostly light-hearted comedies, they instead turned to television. Nowadays Norwegians domestic cinema is seeing great success once more. Having adopted Hollywood techniques and storytelling systems, Norway has aimed to emulate their domestic success. And as of 2011 it appears to have worked, with nearly a quarter of the box office coming from domestic products, Jo Nesbos Headhunters was a particular draw, finishing third last year behind the international beasts of Harry Potter and The Pirates of The Caribbean. Bronze - Troll Hunter (Andre Ovredal, 2010) 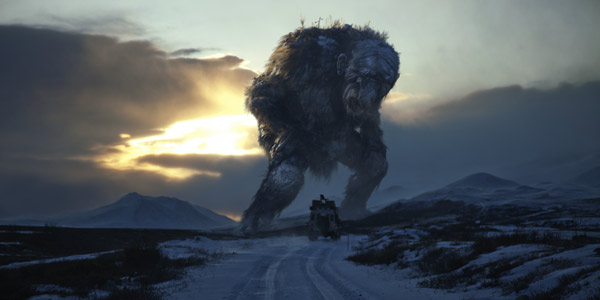 Troll Hunters may seem a bit too contemporary by many to gain a medal, so look at it as the young rookie sprinter who sneaks onto the podium but still remains a fair distance behind his fellow runners. A found footage film, Troll Hunter adopts the techniques of recent Hollywood horror outings, telling the story of a film crew set out to investigate the killing of bears. Instead, they find a government conspiracy, which is covering up the existence of rather large trolls that stalk the contained Norwegian wilderness. Meeting up with a troll hunter named Hans, they begin to delve further into the existence of trolls and discover more about their history. Admittedly it is extremely silly and fun, however it is also impressively ambitious for Norwegian cinema. Troll Hunter is evidence of Norways increasing adoption of American genres and techniques. Successfully bringing the monster genre to Norway, Ovredal creates hugely impressive visual effects to depict the trolls (whom are part of Scandinavian folklore). His confidence exudes from the screen whenever the trolls appear, he knows they look good, but he also knows exactly when to use them. Taking the baton provided by Cloverfield, Troll Hunter surpasses it in quality and the utilization of handheld camerawork, which supplied both the most interesting and loathsome factor of Drew Godard's film. It is evidence of an extremely resourceful industry, borrowing techniques and genres which are historically only found in Hollywood and giving them an almighty jolt of Norwegian flair. When Godard and Abrams revealed their monster, too many questions were raised. When Ovredal reveals his Trolls, he lets them revel in the limelight, with the only question being; how did Norway manage to outdo the global giants of Hollywood? Silver - Ni Liv (Arne Skouen, 1957)

Based on a real life story, Ni Liv is a retelling of the story of Jan Baalsrud, who was a Norwegian rebel of the Nazi occupation of Norway. The film follows the momentous event, where, he and other members of the resistance, attempted to destroy a German air control tower. When they are inadvertently found out by a Nazi officer, their ship is attacked by Germans and in the ensuing chaos, Baalsrud is the only survivor. Battling through the snow laden landscape of Norway, Baalsrud manages to escape capture, but not without a cost, suffering from frostbite and snow blindness, his body becomes withered in his heroic attempts to reach the safe border of Sweden. His journey is an inspirational tale and he is seen as a hugely important figure in Norways history. The sacrifices that he and his fellow Norwegians made are remembered on July 27th in Troms, where many people retrace his journey to Sweden over the course of 9 days. While the film is extremely patriotic, the real life story deserves it and demands it. The performance of Jack Fjeldstad as Baalsrud, is a daunting one to take on, but it would be a performance that would rightfully define his industrious and successful career. Gold  Insomnia (Erik Skjoldbjaerg, 1997)

Having your debut film remade by Christopher Nolan, the now golden boy of American cinema, must mean you did something very, very right. A superb thriller, Insomnia is based in a town located far above the arctic circle, meaning that darkness is at a premium as sunlight hours remain long. It tells the story of a former Swedish police officer, Jonas, who was shamed into moving to Norway after sleeping with a witness in a case. While in Norway, he is sent to a town with his partner Vik, to investigate the murder of a young girl. Staking out the scene of the crime, they successfully set up a trap to lure the killer back to the scene of the crime. However when the trap goes wrong, Jonas accidentally shoots dead Vik while the murderer escapes. What ensues is a noir narrative full of guilt and mind games between Jonas and the murderer, leading to many unexpected twists and turns. The performance of the now well-known Stellan Skarsgard is phenomenal, in a role where he plays the hero, it is actually quite hard to support him; his hands are stained with blood too. However, the real star of the show is the films location. Taking on a pivotal role in the film, the location plays havoc with Jonass mental state. Lacking sleep due to the constant daylight, the direction of the narrative is constantly at the will of its location, not its character. I am not one to condone remakes, so I wont do it here. Seek out the original, because although I love Pacino, hes no Skarsgard.. well in this instance anyway.
Contributor
Dan Lewis

Dan Lewis is a writer, reader and lover of all things cultural, whether that be Film, Television, Music or Photography. His idol is Louie CK. His favorite Animated TV show is Archer. And if he was a Wire character he'd be Nicky Sobotka.