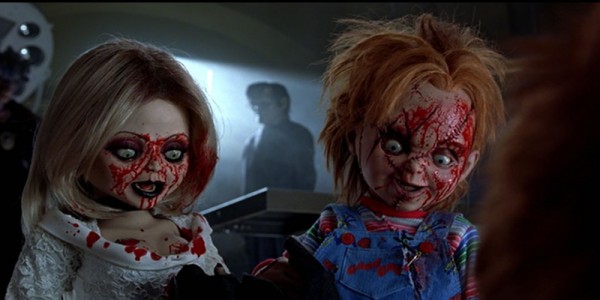 Pure crap. From start to finish, this is pure crap. Don Mancini is Chucky's creator. Where most other horror directors have abandoned their characters in the past to often horrible results (I'm looking at you, John Carpenter), Mancini has stuck with Chucky for every single film. I have to give him props for that. He has written all the films on this list. With Seed of Chucky, the fifth entry in the series, Mancini decided it was time for him to take the reigns as director. Many attribute this to Seed of Chucky's awfulness, but I don't think that's fair. There's nothing inherently wrong with Mancini's direction. On the contrary, I believe it was his time spent directing that may have had a hand in the real problem: that Godawful script. Perhaps, if Mancini had spent less time familiarising himself with lenses and more time reading what he had written, Seed of Chucky might be higher on this list. But he didn't, and here we are. Seed of Chucky takes the wonderfully terrifying concept of a demon spawn who was never supposed to exist inflicting terror on the world, and turns it into a strange-for-the-sake-of-strange Ed Wood parody. Chucky's son (daughter?) is born following Chucky and Tiffany's almost impossible conception in the previous film. Although that film ended with a fanged, bloody, plastic infant exploding from Tiffany's womb and violently killing a cop, Seed fast-forwards several years later to find that terrifying demon has grown into a whiny, gender-confused goof named Glen who pees himself when he's (she's?) stressed. I mentioned that all the Chucky films try to do something different? This is the only real instance of that going completely and horribly wrong. When you think about that from a horror series perspective, that's pretty good on the whole, but it doesn't let Seed off the hook. Glen's complete failure as a character would be bad enough on its own. However, not content with the sheer pointlessness of Glen, Mancini proceeds to give this film the most unwatchable A-plot of all the films, as Chucky and Tiffany are brought back to life by Glen through new dolls made for a new Chucky-based film in Hollywood. The trio then spend the movie trying to possess the bodies of Jennifer Tilly (Tiffany's real-life voice playing herself as a desperate actress - get it?) and rapper-turned-actor-turned-hot dog vendor after this movie, Redman, while also debating whether Glen is a boy or a girl, debating whether they should continue killing at all (you can guess Chucky's feelings on that), and killing John Waters with acid. Yep. At his best, Chucky is funny and scary. In Seed, he's neither. How Mancini could have come up with something this awful is beyond me. This was not a quick turnaround between films. Seed was released six years after Bride of Chucky. He had six years to come up with something and this is what he came up with. All of Chucky and Tiffany's edge from the last film is gone. Glen is a completely obnoxious character with an arc that makes no sense. The mythology gets completely jumbled beyond repair. Even the once great Demalla chant, which is often used to transfer one's soul from one vessel to another, gets the shaft as Glen only half-way sets it up before mommy and daddy come back to life. They come back to life, by the way, in the worst dolls in the history of the series. The animatronics here are the worst they've ever been and when you're talking about the newest, supposedly most technologically advanced chapter in a franchise, that's bad. The only redeeming idea presented in this film is Chucky's ultimate epiphany that he would rather stay a doll than continue to attempt to possess another human body. After five films, that was a nice piece of character growth on his part. Unfortunately, it was buried in a film that has no idea what it's trying to accomplish, ending with Chucky and Tiffany's doll son (daughter?) transferred into two separate twin, infant human bodies, Tiffany pretending to be Jennifer Tilly, and Chucky's hand coming back to life on its own to terrorise them all. The only thing scary about this entry is how bad it is.
Contributor
Josh Wright
Contributor
Twitter
Facebook

Josh has no concept of reality. He has spent more time with fake people then real ones and finds the fake ones to be more real. He believes Batman will one day be the basis of a religion. His imaginary friends include wrestlers, serial anti-heroes, and various jedi. Warning: Object may go from sincere to sarcastic without notice. Handle with care.