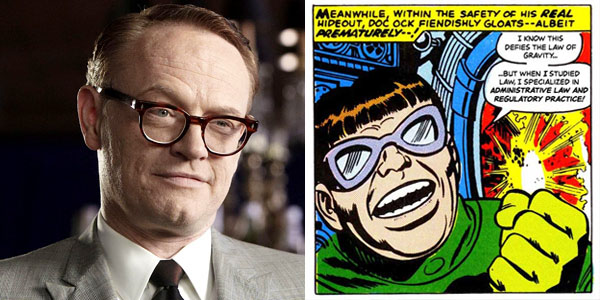 The actor has already brought one iconic villain to screen, in that shape of Sherlock Holmes' arch-nemesis Moriarty for Guy Ritchie's revamped Holmes series, and his ability to balance the wayward genius of that character with Machiavellian intentions offers a strong foundation that would work on the same terms for Doc Ock. Crucially for the character is a sense of theatricality: he is one of the more grotesque Spider-Man villains, and his malevolence is grander for the contradiction in his physical state and his mental prowess and capacity for evil. Part of that, of course, is offering a note of humanity to the character, but even more so portraying an authentic vulnerability that transmits the scars of his backstory. Like a number of Spider-Man's villains, he is the product of a difficult upbringing - abusive at worst - and the most intriguing Ock arcs play on that vulnerability more explicitly. Easily the most intriguing proposition would be to have Harris play a dying Ock, from after the Civil War arc in the comic book universe, driven mad by the need to extend his legacy as a great villain, and compelled to bring the Sinister Six together to help cement that fearsome legacy. Quite how likely it would be for a spin-off to look at a dying villain when it is so strongly implied in The Amazing Spider-Man 2 remains to be seen, however.
Contributor
Simon Gallagher
Contributor
Twitter

10 Movie Moments Everyone Was Waiting For (That Never Happened) New