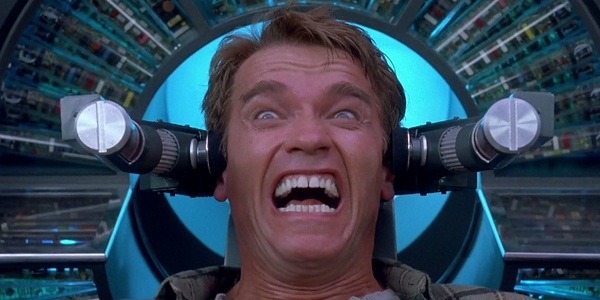 Arnold Schwarzeneggers face swelling to the point of explosion, midget prostitutes firing semi-automatic rifles and, of course, a 3-breasted mutant woman on Mars. These are amongst the many carnal delights housed within Paul Verhoevens seminal 1990 sci-fi action-adventure classic Total Recall. Set in a future time where other planets in our solar system have been colonised this film tells the story, or perhaps dreams the story, of Douglas Quaids adventure on Mars. Quaid, played by Schwarzenegger, is a working class miner from Earth who has longed all of his life to go to Mars. Unable to afford the expensive cost for flights he sees an advert for a company called Recall who can provide people with the memories of certain experiences. So, as you do, Quaid decides to have the experience of being a super agent on Mars prosthetically implanted in his brain. As the procedure starts things begin to go wrong and the lines between reality and the imposed fiction of the Recall operation become hopelessly distorted. Based on a short story by Phillip K. Dick and adapted for the screen by Dan OBannon, Ronald Shusett and Gary Goldman, Total Recall had some real Science Fiction heavyweights behind it. K. Dick was an absolute mastermind of dystopic science fiction whose prose have served as inspiration for a number of hallmark sci-fi classics, from Blade Runner to Minority Report. Of OBannons many impressive credits theres his writing of the original script for Alien, alongside Shusett, as well as collaborating with John Carpenter on Dark Star and doing some computer animation for Star Wars. Due to the strength of its storys foundations and the established quality of its writing team, Total Recall is often a surprisingly intelligent film which belies ones expectations of an Arnie blockbuster. The film sharply operates to break down the very fabric of its cinematic groundings; with the audience placed in an equally precarious position to the movies protagonist in his attempt to ascertain what is and isnt a dream.

Like all great Science Fiction the challenge posed to its audience is balanced against more mainstream, lighter forms of entertainment. In this case we have the Hollywood action star to end all Hollywood action stars, Arnold Schwarzenegger. Behind the directors chair we have the carefree and reckless abandon of Paul Verhoeven, the man who had previously directed Robocop and would go onto huge success with the sublime Starship Troopers and infamy with his disastrous Showgirls, popularly considered the worst film ever made. Through the context of Total Recalls production background we are offered a film which sits on a beautifully balanced fulcrum of appreciation; gently oscillating between its more outrageously vaudevillian details and its fairly complex and engagingly unique representation of memorys prosthesis. Sharon Stone stars as Quaids wife who turns around to be a secret agent posted to ensure that the memory erasure of Quaids past identity, a secret agent called Hausser, doesnt re-surface. Somehow in the Recall procedure facets of his former identity flicker to life; he suddenly becomes a devastatingly effective assassin and finds his way to the red planet to identify what on Earth, or perhaps more appropriately what on Mars, is going on. Upon arrival he discovers that a rebellion is being waged by the suppressed workers and the callous corporation that controls their oxygen supply. Quaid/Hausser finds himself hopelessly embroiled in the midst of this social malaise with the plots twists and turns unforeseeably shifting his allegiances and historical grounding from one side to the next.

As you would expect from an Arnie flick there is plenty of action and, while it now looks awkward and clunky, is still genuinely very entertaining, perhaps mostly as a result of its charmingly dated tone. From punching Sharon Stone square in the face to ripping off Michael Ironsides arms the films emphasis on bawdy action is sustained from start to finish and doesnt disappoint. Complimenting the action you have all the one-liners your heart could desire and a visual feast of the bizarre, from mutants faces which exhibit disturbingly vaginal scarring to a long list of gruesome deaths. Simmering behind the films surface are some surprisingly sophisticated ideas for such a mainstream and action-centric product. Of particular note is a sequence where a man proposes himself as a representative of the Recall Company. He states to Quaid/Hausser that he has entered his dream to wake him from his free-flow dreamscape to save his body from eventual lobotomisation in reality. Uncertain of the truth to this mans claims a tense showdown unfolds with the lines between the films representations of reality and dreams becoming impossible to discern. It is through such innovation in its investigation of dreams and memories legibility, which later films such as The Matrix and Inception clearly owe a debt to, that Total Recall manages to memorably distance itself from other big budget action films of the period. Not just an all out brawl but a movie which allows pause for thought, all be it brief. In spite of the distinctly stinky remake released last year the original remains an engaging and fun watch which you really cant go too far wrong with. As exciting and visually stimulating as it is cerebrally engaging, a true cult classic. As a bonus, heres a clip containing excerpts of Arnies commentary, what a guy. http://www.youtube.com/watch?v=ncR2_pnzngM
We need more writers about Arnold-Schwarzenegger, Paul-Verhoeven, Total Recall and Retrospectives! Get started below...
Contributor
Toby Neilson
Contributor
Twitter

I'm a freelance film critic in my early twenties. I'm passionate about films, particularly cult cinema, horror and science fiction films. I graduated from Exeter University with an MA in Film Studies and have been writing film reviews/articles since early 2012. Find me on twitter @tobyneilsonfilm