The Wicker Man was recently given the ''Final Cut'' treatment by director Robin Hardy for its 40th Anniversary. It was released in selected cinemas last month and is now being made available to own on blu-ray. Anyone who missed it, you can check out my review of the final cut of 'The Wicker Man' here but in summary, it is the version you should see, despite it being shorter than 'The Director's Cut.'' Not only does it flow better, but you also get a restored scene that introduces Christopher Lee as Lord Summerisle much earlier. The blu-ray set doesn't skimp on content and you get lot of value for your cash. Included are the different versions of The Wicker Man, complete with commentary, behind the scenes features and soundtrack. Disc 1 The Final Cut Burnt Offering: The Cult of The Wicker Man documentary written by Mark Kermode Worshiping The Wicker Man - Famous fans featurette The Music of The Wicker Man featurette Interview with Robin Hardy Interview with Christopher Lee & Robin Hardy (1979) Restoration comparison Trailers Disc 2 UK Theatrical Cut Directors Cut (with Audio Commentary) Making of Audio Commentary short film Disc 3 Soundtrack To celebrate the 40th Anniversary and impending blu-ray release on the 14th October, WhatCulture sat down with director Robin Hardy to discuss the film, religion and the Nicolas Cage remake.

WC: I saw the The Wicker Man on the big screen for the first time a few weeks back. I was surprised how much of a difference the new edits make. RH: It makes a huge difference. What did you think about the first night in The Wicker Man? The scene in the pub, thats whats been restored. I thought the whole pub sequence flowed much better in this cut. You already know all the people on the island are odd, but their eccentrics are introduced in a way that makes you feel more uncomfortable. It also made a difference watching the film with other people, especially when there was a collective snigger at the bar tender character. The bartender was played by Lindsay Kemp and hes a famous mime artist. A wonderful mime. Hes done a lot of work in this country and abroad and he has his own troop. So it was a strange piece of casting.

He also worked with David Bowie I believe. But the casting worked, he gave a sense that the whole island in The Wicker Man is essentially a bit awkward and strange. That was the idea. But the reason I asked the question was because in that scene we restored the sequence with Christopher Lee and the boy he brought to Britt Eklands window. Yes, you can notice the quality difference in the print. Yes you can, but I thought that the scene worked perfectly. On a DVD it is less noticeable than on the cinema screen. Its got the slightly grainy effect because we have had to intermix it from the original print. But it looks natural. It didnt think it looked odd, you can tell the resorted section is from a different print but you are more focused on the fact that there is more Christopher Lee in the film now. Thats right, otherwise you dont see him until two thirds of the way through. For the people who might be wondering, how much does this version differ from the fabled long version of The Wicker Man? It differs at the beginning. There is much more on the mainland in the original version but Ive cut it for this. Not only is this the resorted version but also it is the final cut. After living with the film for 40 years, this is how I wanted it to look. Personally I didnt like the police station sequences in the original cut, when you see Howie in the police station and all that, but I didnt feel they added anything to the film. We were trying to show you what kind of man Howie is, very puritanical with the other policemen laughing at him, but you get what kind of person he is all at once. You get that right at the beginning because you see him in Church, reading the bible. Thats why I kept that bit in, because the religious text he is reading talks about the Christian sacrifice, and of-course the film ends with the pagan sacrifice. Its bookending the film.

Do you think the religious side of The Wicker Man has lost some of its impact since the 70s? Howie comes across as a person from a different time. I imagine the pagan scenes would have been more shocking when the film was originally released. I dont know, Youre right that certainly Scotland at the time was pretty puritanical. I think youre right, there is a degree of that. I say that because Howie comes across as odd now, as do the islanders. Especially when he is walking around and is shocked by anything remotely to do with sex. Well he wouldnt in the States. In the States, he looks perfectly up to date. Was it difficult selling the film in America? I image certain sectors of the Bible belt cant have been too pleased with the film. Funnily enough, not. No, when the film was being released in the States, we had a group of students from a university whos project it was to help us with distribution. And their idea was to take it to the Bible belt and face that problem head on. So they arranged a series of prayer breakfasts where we showed the film to the Baptists and the priests. They were terribly excited because the scene on the beach is a real statement of Christian belief. Very rare in any movie because it is absolutely from the heart. In fact, I cant think of any movie which I have seen where such a series of speeches are made. And they just loved that. I dont think those people, thank goodness, are quite so moved by a little bit of harmless nudity as they are by other, more brutalist forms of film making. They were actually selling the film from the pulpit, telling everyone that they must go see it. So they overlooked everything in the film that you would expect them to find offensive and were sold by the speech Howie makes on the beach? You seem it talks about resurrection which is a very important part of the Christian faith. And then of course, in the Wicker Man before he gets burnt, Howie talks about it. It was the same speech that Sir Walter Reighley, the great explore in the time of Elizabeth the 1st, made when he was about to be executed. It was the speech he made as he made his way to the block to have his head cut off. That surprises me, it normally doesnt take a lot to offend some sections of religious society. I think, even though they might be fundamentalist, they are not as stupid as we think. Were you hoping that by 2013 the world would have moved away from focusing on religion as much as it still does? If you had asked me in 1985, at which time church-going was disappearing all together, except in the States, and everyone in Europe was skeptical about religion; if you asked me then if I thought religion would ever become a major factor again, we forgot about the Middle East. In those days, not many people knew much about the Middle East and I would have been amazed to see what is happening now in the name of religion, of all things. The extraordinary thing is that we had the exact same thing happen in Europe but in the 17th century. The catholics and prositants fought each other for 30 years and millions of people were killed, mainly in Germany. And Its repeating now. It is and the situation is going to get a lot worse before it gets better. Its very disheartening. 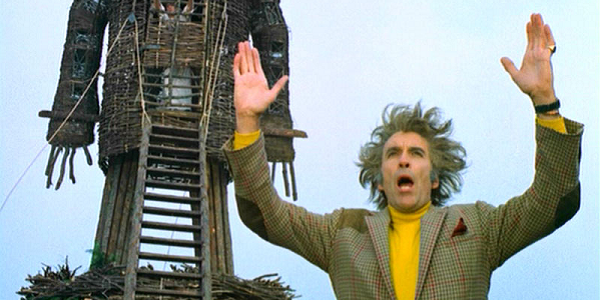 You toured America with Christopher Lee when you were first selling the film. That must have been an experience. It was an amazing experience. Any tour stories you would like to share. He sometimes did a thing where he teased them. Because he was an establishment figure and they would ask him, what is your opinion of the Beatles? And he would reply, Who? That would really get them going, they would return with how can you not know who the Beatles are? Has he seen this cut of The Wicker Man yet? I dont know, he hasnt been well. I used him briefly in The Wicker Tree. I was going to ask you how you see The Wicker Tree fit in The Wicker Man universe. Its the same genre. It uses music in the same way, it uses photography in the same way and the brightness and the beauty of the countryside and so on. But the plot is quite different. The Wicker Tree has Christian Evangelists coming over here to preach. Yes, Its about what we have been talking about. The Wicker Tree has a similar ending to The Wicker Man. Were you worried that trying to recreate the impact of the original films ending was something that was going to be hard to recreate? I think the impact of the second film is great. You have to be imaginative to see that. Certainly the third film, The Wrath Of The Gods, the impact is going to be every bit as shocking. When do you begin shooting that? We hope to start next year.

What were your thoughts on the Nicolas Cage remake? I dont know what to say really. The sad thing about it was that a lot of talented people completely messed up and my theory is that Tony Shaffer who wrote the original, he passed away a few years ago and cursed it. Its a film that makes it really easy to pick out comedy moments. Its a shame, if they were going to remake The Wicker Man, they should have done a better job. Agreed. Im not against remakes at all. I think The Thomas Crown Affair remake was brilliant. In fact it is one of my favorite films. But The Wicker Man remake, I dont understand how a talented writer and director with a very talented actor (Nicolas Cage), particularly as a character actor, I dont see him as a leading man could make such a mess. Nicolas Cage is just picking the wrong projects at the moment I think. Projects he can't do. He got that film made because he wanted to play the Howie role, but having done that, the choice of the writer/director who has a fetish for turning men into women was an extraordinary choice. Of all the writers and directors he could have got, I mean (Neil LaBute) has had six plays on in the west end over the last few years and they have all been a great success. But that is when he is on his subject. Grafting his subject on to The Wicker Man was absurd. It seemed like a sledgehammer approach where he tried to push the feminist angle in the remake. It was a bit too obvious. And what has it got to do with The Wicker Man? Exactly. The Wicker Man: The Final Cut is released on blu-ray on the 14th October.
Want to write about The Wicker Man, Robin-Hardy and Interviews? Get started below...
Contributor
Amarpal Biring
Contributor
Twitter
Facebook

Film Theory: The Evil Mastermind You Didn't Notice In Interstellar