Before I begin with this list it is important for me to point out to that I am actually a GLEE fan... however, if that puts you off this post, the following list can also been seen as a negative points for all you haters out there (or those who love to hate-watch Glee). It is my opinion that Glee is the most misunderstood series on TV and the most harshly judged. Glee is not a drama nor is it a comedy, it is somewhere in between with a good dose of musical glued on. Glee also isn't supposed to be realistic- it's supposed to be silly, poppy, ironic, satirical and edgy in a similar vein to such films as Clueless and Mean Girls. What I am getting at is, if you take this show too seriously you are not going to like it, but if you understand what it is and what it is supposed to be you can have a hell of a lot of fun watching Glee. Despite not being a comedy, if you get into the shows rhythm, it is one of the more funny programs on TV. Having said that, even as a big fan of the show, it isn't perfect by any means. It can get repetitive, it can get too sentimental and cheesy at times and, and although I don't have a huge problem with a show that tries to promote a political message (in fact, I love and respect Glee for this very reason), occasionally the odd message here and there can come off a little heavy-handed. But it least it tries. Glee does many things really well. The show's production values are top notch, the shows cast are some of the most hard working and talented actors on TV, and the musical numbers are actually pretty good if you can get past your music snobbery- Paul McCartney, Bono, Katy Perry, Stevie Nicks, Lady Gaga, Elton John and many many other big name musicians aren't insulted, so why should you be? But Glee also does a few things badly... and although, like I said previously, the show is satirical and ironic, the show does seem to use pretty embarrassing, silly and occasionally offensive character stereotyping. Here are Glee's seven worst examples (with a couple of honourable mentions later on)... p.s. It is difficult to talk about stereotypes without sounding a little stereotypical yourself, so if this list offends anyone, know that this is not intentional at all, and I love you all. 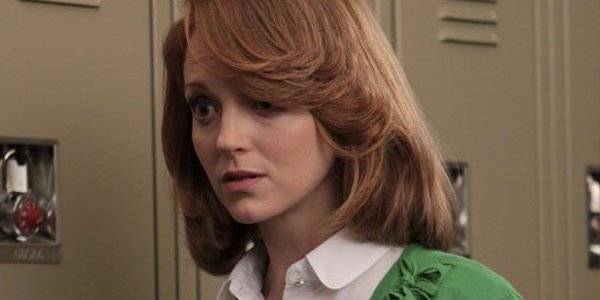 It is a common stereotype in film and television to show redheads as one of either two things (or sometimes both)... either wild and adventurous, or crazy, and Emma Pillsbury fits into the later section of this stereotyping. Before people start to get insulted with my use of the word "crazy" I don't mean it... I am just trying to make a point of how insulting some stereotypes can be. Emma on Glee suffers with quite severe OCD; and no, I don't think OCD is "crazy", but it is an illness. Not that you need to know anything about me (or want to), but I also suffer from OCD, similar but less severely than Emma's, and surprisingly, I am not insulted by this representation. In fact, I think it is one of the better few representations of this illness on television, and I am thankful to see my condition represented on TV. But the "Crazy Redhead" stereotype (for example Catherine Tate on the US Office) is used too many times, and is not only arguably insulting to people who suffer from mental illnesses, but more so to redheads themselves who often get a hard time from the media and even the world... stereotypes like this one, or the stereotype of them being fiery, feisty and adventurous won't do that much to help. However, there are a lot of redheads currently on TV who don't fit into these categories, and due to their popularity - Christina Hendricks and Damien Lewis for example - this will help give much needed balance to the redheaded stereotypes.
Contributor
Daniel Bowen

I am a recent Screenwriting for Film and Television graduate from the UK. I am an unashamed geek who loves everything Marvel, and anything Joss Whedon has ever touched (except for maybe Alien Resurrection and Titan A.E). My current favorite TV shows are Breaking Bad, Family Guy, House of Cards, Game of Thrones, American Horror Story, Homeland and Glee. I look forward to debating things with all of you in the future. (As of January 2013 I have had over 1 million views since joining WhatCulture in September 2012. You can reach me at danieljamesbowen@hotmail.co.uk)

10 Recent TV Shows That Were Sent Out To Die New

Star Trek: Picard - Everything We Know About Season 3

Friends: The Progressively Harder Who Did It Quiz

The Big Bang Theory: 8 Moments That Were Completely Unscripted