The Doctors triumphant return to television after 16 years has created a two-tier system of fans: people who are only interested in the show from 2005 onwards, and people who embrace its entire 48 year history. As a member of the second group, I am occasionally asked what story I would start with from the original 26 year run to try and convince someone whose first Doctor was Christopher Eccleston that there was more to the Classic Series than wobbly sets, identical corridors and polystyrene spaceships. Well, I mean, of course there was. There were also gravel pits. I always end up with the same story, one that was among the very first released on VHS, back in the 1980s. I would start with The Time Warrior. Heres a quick list of reasons why.

The Time Warrior has a number of very apparent features that some other stories lack. All its episodes exist (106 episodes of Doctor Who no longer exist in the BBC archives), its available on DVD, its only four episodes long and its in colour. Off-air audio recordings of The Power of the Daleks accompanied by still black-and-white photos and linking narration can wait until the indoctrination is further along.

Television was slower paced in the sixties and seventies (and even the eighties and nineties). A story which unfolded in a fairly leisurely fashion over four 25-minute episodes in 1972 would be dashed off in 45 minutes today. Some would be polished off in two minutes before the opening titles. A number of four-parters from the 1970s could simply have episode three removed entirely. And this gradual advancement of plot can make watching them today a bit boring. While The Time Warrior cant quite match the frenetic energy of, say, Lets Kill Hitler, it certainly clips along compared to some of its more sluggish stable-mates. Basically, if The Time Warrior bores you, then you have little chance of liking any other Classic Who and should stay away from The Web Planet, The Invasion of Time or Colony in Space in case they drive you to self-harming. 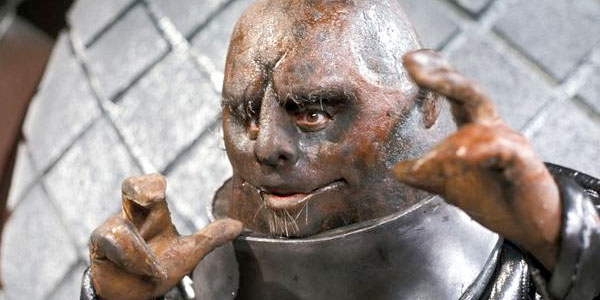 Its got the first appearance of a new alien race (which itself is a bonus  there isnt a lot of pre-existing mythology to deal with) which race has since reappeared in the New Series, looking more or less the same. Kevin Lindsays Linx is still the definitive potato-headed warmonger and the mask is very effective. No ludicrous rubbery giant clams or pantomime horse Nessies to spoil the illusion here.

The only (non-robotic) companion from the Classic Series to have made a return appearance in the New Series, and with good reason. Elisabeth Sladen, who sadly died last year, is luminous and does wonders with the usual thin characterisation handed out to the Doctors side-kicks. Plus this is her first story, which again makes it an excellent jumping-on point for a new viewer. She asks all the questions which might be in their heads, like who is that funny-looking man in the shiny cloak? and what are all these soldiers doing here?.

For a show about a time traveller, there isnt much actual travelling in time in the Classic Series. Early on, the TARDIS was forever landing in Earth historical settings, but these were quickly phased out once Patrick Troughton took over. Jon Pertwees Doctor was largely confined to Earth in the present day (or near enough) but at this time, he was beginning to spread his wings once more and so trips back in time were once again possible. Prolific writer Robert Holmes never liked historical stories, and so came up with what he called the pseudo-historical  a science fiction story in a historical setting. The mix plays beautifully, and allows the new viewer a quick glimpse of the Brigadier and the whole UNIT set-up before we go merrily back to the Middle Ages.

Classic Doctor Who is probably least likely to connect with a new viewer when its being pompous, portentous and solemn. The Time Warrior is stuffed with ripe performances, witty one-liners and sparkling dialogue. Whether its David Dakers lusty Irongron describing Pertwee as a long shanks rascal with a mighty nose, or the charmingly bumbling Professor Reubish or just the sight of the Doctor merrily tossing explosive stink-bombs over his shoulder to rain down harmless terror on the other side of the battlements, the whole thing as a delight. When Sarah marvels at him Youre serious, arent you? The Doctor responds About what I do, yes. Not necessarily about the way I do it. That pretty much sums this story up.

Even the Sontaran vessel looks pretty convincing. All this, and its been lovingly restored, looks great on DVD and will be over-and-done with in about as much time as it takes to watch the average modern Doctor Who two-parter. In fact, I think Im going to watch it again right now. Buy it from Amazon: http://www.amazon.co.uk/Doctor-Who-Time-Warrior-DVD/dp/B000R20ZA6 Buy it on iTunes: http://itunes.apple.com/uk/tv-season/doctor-who-the-time-warrior/id284291769 If youve come to Classic Who for the first time, how did you find it compared to the New Series? And if youve been inspired to watch The Time Warrior after reading this, do let us know if you enjoyed it. The comments are below.
Want to write about Doctor Who, Elisabeth Sladen and Jon Pertwee? Get started below...
Contributor
Tom Salinsky
Contributor
Twitter

Tom is a writer, improviser, teacher and trainer. His first book, The Improv Handbook, is going into its second edition later this year. His first play, Coalition, played to sell-out audiences at the Edinburgh Fringe in August. He quite likes Doctor Who.

7 New Star Wars TV Shows That Are In Development

Brooklyn Nine-Nine Or Parks And Recreation Quiz: Who Said It - Rosa Diaz Or April Ludgate? New

Brooklyn Nine Nine Quiz: Whose Line Was It - Jake Or Charles?

The Office Quiz: Can You Match The Michael Scott Scene To A Season? New